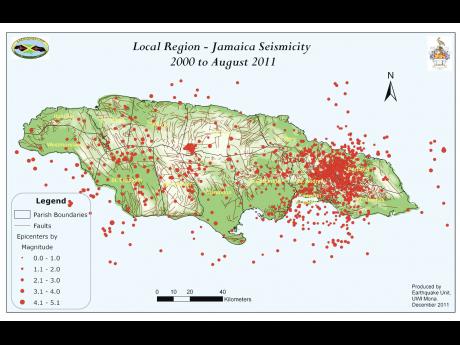 The University of the West Indies (UWI), Mona Campus will today sign a memorandum of understanding with the Jamaica Social Investment Fund (JSIF), which will see the university’s Earthquake Unit getting support valued at $104 million to strengthen its ability to monitor seismic activity in Jamaica.

This initiative is being implemented under JSIF’s Disaster Vulnerability Reduction Project (DVRP), which is aimed at enhancing Jamaica’s resilience to disaster and climate risk. The project is valued at US$30 million and is being funded with a loan from the World Bank.

Under DVRP, ten digital seismometer systems will be placed at seismic stations across the island to give data on an earthquake’s magnitude, depth and epicenter on land and offshore.

An additional 25 accelerographs will be placed at seismic stations, hospitals, schools, bridges and other critical infrastructure island wide to measure the horizontal force acting on a building.

A new fully equipped seismic station will be constructed to close the gap between Munro College and the Negril seismograph stations in the western part of the island. Solar panel systems will also be provided for seismic stations currently dependent on the Jamaica Public Service (JPS) and at key infrastructures such as hospitals and schools.

“These will provide an autonomous power source for the equipment and will enable the network to be independent of the JPS network, which usually goes down during an earthquake,” said JSIF.

In an effort to address Jamaica’s limited human capacity in the field of seismology, a research fellow at UWI will be provided with funding to pursue a doctorate degree in seismology over a three-year period.

The research fellow will be expected, upon completion of the PhD programme, to work as a seismologist within the earthquake unit.