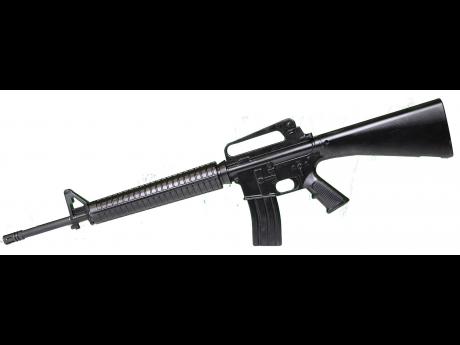 Russell is on trial arising from the shooting death of 18-year-old Ravin Thompson along Darling Street, in downtown Kingston.

Yesterday, the soldier gave evidence that appeared to contradict the testimony of one of his colleagues about the circumstances under which a teenage boy was shot and killed in 2007.

On Monday, a JDF Corporal told the seven-member jury he saw Russell place the M16 rifle belonging to another constable, identified as Morris Lee, in the hands of the teen as he lay injured in the back of a military vehicle.

However, the JDF Lance Corporal, in his testimony yesterday, said he saw Russell place his assigned M16 in the teen's hands.

The lance corporal recounted that he was part of a joint police-military team that was transporting Thompson to the Kingston Public Hospital (KPH).

He said the vehicle carrying the teen stopped along Darling Street and he saw  Russell take a white handkerchief from his pocket and placed it over his hand.

According to the soldier, Russell then placed the M16 he was carrying in the teen’s hand before pulling him from the vehicle and laying him the sidewalk with assistance from Lee.

The teen, who was from the inner city community of Whitfield Town in St Andrew, was later shot several times, the soldier said during cross-examination by Russell’s attorney, Michael Jordan.

The corporal who gave evidence on Monday never mentioned the white handkerchief.