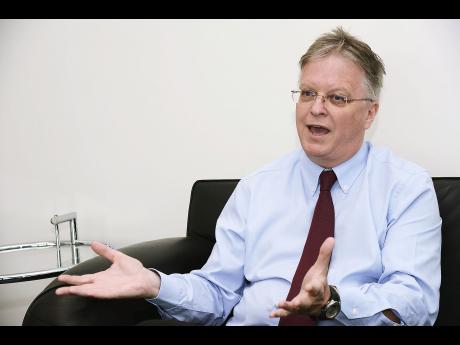 Nearly six months after the Andrew Holness administration rejected a J$5.5 billion offer by the United Kingdom (UK) government to help construct a new adult correctional facility in Jamaica, a British diplomat has said the door is still open for the island to access the deal.

"If the Government were even to want to discuss it again, my door would be open, as with my colleagues in London," said outgoing British High Commissioner David Fitton.

In January, the leader of government business in the Senate, Kamina Johnson Smith, told lawmakers that the administration had turned down the UK's offer to build a modern prison in Jamaica.

At that time, she said that the terms of the offer "were not beneficial to Jamaica as a whole". However, she did not state the unfavourable terms.

"With any issue - whether tackling crime or dealing with some problem in society or building a facility, a factory or school - there is no point in us pushing ahead and doing any of that without the host government wanting it," the British high commissioner told The Gleaner, days before his tour of duty ends in Jamaica.

According to Fitton, the UK government respected the decision of the Holness administration, which indicated that it had other priorities and, as such, could not accept the offer.

As a condition of the prison deal when Jamaica and the UK signed a non-binding memorandum of understanding in 2015, the UK would transfer some 300 Jamaican prisoners in British jails to complete their sentences back home. At the time, however, the UK's $5.5 billion for the 1,500-bed facility would represent only 40 per cent of the full cost to construct the facility, with the Jamaican Government having to find the balance.

In a Gleaner interview earlier this year, Public Defender Arlene Harrison-Henry argued that the prison conditions were below minimum constitutional requirements.

The UK diplomat said in 2015, when then British Prime Minister David Cameron visited Jamaica, an offer of £300 million was made to the Caribbean to assist with infrastructural development. Fitton said Jamaica was now taking advantage of an allocation from that funding to support irrigation projects in southeast St Elizabeth and other initiatives to come on stream shortly.

"That's where our infrastructure fund became more valuable to the prime minister now, to help him with irrigation, farming and development projects in Jamaica," he added.

On the issue of crime, Fitton said the Zones of Special Operations Bill, which cleared Parliament on Tuesday, is a measure that is worth supporting. "It looks as if it incorporates the right sort of checks and balances," he asserted. "We will work with whoever wants to implement that in the best way we can."

Under increased pressure from Jamaicans to address the upsurge in violent crimes, the Holness administration passed the zones of special operations law, which is aimed at clamping down on criminal activities in volatile communities.

With the governor general's signature expected to be affixed to the statute shortly, the law should be ready for implementation in a matter of days.