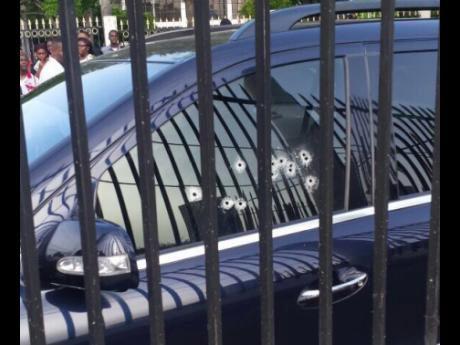 The bullet-riddled Mercedes Benz in which businessman Richard Ramdial was travelling when he was shot up along on Ruthven Road, St Andrew on Tuesday.

The Police High Command has launched a top-level investigation to determine why the police personnel who intercepted the suspected killers of Corporate Area businessman Richard Ramdial released them minutes after they had been held.

Head of the Criminal Investigation Branch Assistant Commissioner Ealan Powell says that he has ordered the cops implicated in the matter to provide statements detailing the sequence of activities and their actions.

Ramdial, travelling in his dark-blue Benz SUV, was shot dead by two gunmen on Ruthven Road on Tuesday at around 4:30 p.m.

The gunmen then reportedly boarded a white motor vehicle, which headed south on Ruthven Road but which was soon intercepted on Balmoral Avenue by cops assigned to the Centre for the Investigation of Sexual Offences and Child Abuse.

Powell says that the vehicle was stopped after the police control broadcasted a radio transmission detailing the getaway car and its licence plate number.

So why then did the cops release the men and the vehicle?

"That is why we are investigating," Powell told The Gleaner yesterday.

However, he said, at the time, the cops were satisfied that the men were clear, having searched them and checked their hands for gunpowder residue.

Powell says that he expects to have the statements from the implicated cops over the weekend.

In the meantime, the assistant commissioner said that investigators have been instructed to enquire whether any closed-circuit television footage of the murder scene is available.

He also says that investigators have been tasked to find the registered owner of the vehicle.