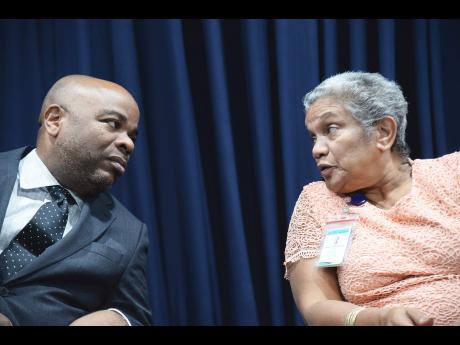 Jermaine Barnaby
Commissioner of INDECOM (left) Terrence Williams and Public Defender, Arlene Harrison-Henry having a chat during a panel discussion between Jamaica Defence Force and Jamaica Constabulary Force about the Zones of Special Operations yesterday.

Head of the Independent Commission of Investigations (INDECOM) Terrence Williams is expressing hope that the Government will respond favourably to the commission's appeal for investigators and other resources, which will allow them to properly probe instances of police wrongdoings during the execution of the Zones of Special Operations.

Williams was addressing The Gleaner yesterday following the completion of the special human-rights training course for the security forces at Up Park Camp in St Andrew.

"The staff members at INDECOM have been very good and hard working in their service, but it has been a strain. We do need more staff. Furthermore, this (Zones of Special Operations) will certainly aggravate that, and we are hoping that the Government will give us additional funding to get more staff," Williams said.

"We have written (to the finance minister) on that. We need more resources. Many people don't realise that INDECOM, from day one, was given fewer investigators than the BSI (Bureau of Special Operations) had. We were informed in 2010 when we started that the BSI had 50 investigators. Up till today, we have not reached that number. We are doing the work that the BSI did, plus more, and with less staff," argued Williams.