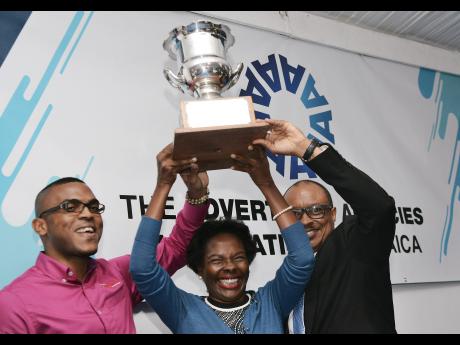 Rudolph Brown
The Gleaner’s Business Development Manager Nordia Craig (centre) and Paul Allen (left), assistant marketing and communications manager of The Jamaica Observer, lift high the Advertising Agencies Association of Jamaica (AAAJ) Top Trophy which they will share. Joining in the celebration is Kingsley Morris, president of the AAAJ.

Just as it was in 2015, the 2016 Advertising Agencies Association of Jamaica Top Award ended with a tie. This time, it was The Gleaner Company (Media) Limited and the Jamaica Observer that came out sharing the prime prize.

The awards presentation, which was held yesterday at the Spanish Court Hotel in New Kingston, also saw The Gleaner Company walking away with the Media of the Year Award for the print section.

Nordia Craig, manager, Business Development & Marketing at The Gleaner Company (Media) Limited, noted that the award signalled the company's commitment to providing quality service to its customers, while stressing that the organisation was in the process of embarking on innovative initiatives in order to stay relevant.

"We are looking to leverage our various strengths in the group, to keep us in robust business, and so we are confident for the future," she said.

Meanwhile Renee Robinson, film commissioner and manager at The Jamaica Promotions Corporation (JAMPRO), guest speaker at the event, analysed branded entertainment and how it intertwines with traditional media.

She said that the country should find ways to capture both the traditionally and non-traditional markets. Talents, she said, existed in Jamaica which could enable it to get beyond the long established markets.