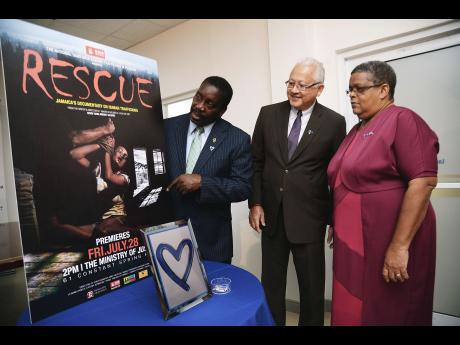 Jermaine Barnaby
From left: Robert Montague, minister of national security; Delroy Chuck, minister of justice; and Carol Palmer, chairman of the National Task Force Against Trafficking in Persons, view the Blue Heart Lapel and a poster from the human trafficking movie, ‘Rescue’, at a press conference at the Ministry of Justice in Kingston yesterday.

Systemic weaknesses in the investigative, prosecutorial and judicial services, amid the high level of unemployment, make combating human trafficking a difficult challenge, says Carol Palmer, chairperson for the National Task Force Against Trafficking in Persons.

"Jamaica's high levels of unemployment, especially among the youth and women, provide a fertile breeding ground for traffickers," Palmer said.

She was addressing a press conference yesterday marking the start of Trafficking in Persons Week at the Ministry of Justice.

The week is being observed under the theme 'Stop Human Trafficking: Everybody's Business', which seeks to draw attention to the need for a wholehearted approach by Government and the society in fighting modern-day slavery, in the form of human trafficking.

"We continue to struggle with weaknesses in the investigative, prosecutorial, and judicial services. We are making some headway, but we still have some way to go," Palmer noted.

Palmer, who is also permanent secretary in the Ministry of Justice, stated that the week's activities are designed to send a strong message that putting a stop to human trafficking does not begin and end with government action.

Instead, she noted that the task force will be going door to door and business to business in taking the message against trafficking in persons to people in Rocky Point, Clarendon, and Spanish Town, St Catherine.

Delroy Chuck, the minister of justice, said that a robust judicial system is needed to secure prosecutions, to send a powerful message to offenders that they will be punished.

Minister of Justice Delroy Chuck has said that while there was reliance on law-enforcement agencies and the prosecutorial and judiciary services, protection of victims during and after court cases was of fundamental importance.

National Security Minister Robert Montague issued a call for a sustained awareness campaign, aimed at targeting the most vulnerable and susceptible in the country.

He said that nightclubs, bars, massage parlours and, in some cases, in persons' homes, were being used to mask the horrors of human trafficking, adding that children who have gone missing have fallen prey to the trade.

"Many of the missing children that we see and hear about are part of the trafficking, forced into labour or sex. Sex tourism is happening in our tourist centres," Montague said.

Jamaica is cited as a source and destination country for adults and children subjected to sex trafficking and forced labour.

Worldwide, children make up a third of human-trafficking victims, with women and girls accounting for approximately 70 per cent of all persons trafficked.