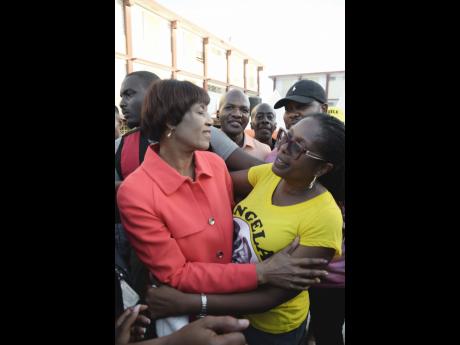 The need to protect the "interest" of St Andrew South Western was a common refrain among the key leaders in the People's National Party (PNP) yesterday as outsider Angela Brown Burke was selected as the party's standard-bearer for the constituency.

The senator and PNP vice-president gained 595 votes to Audrey Smith Facey's 502, neither getting 50 per cent of the 1,894 who were eligible to cast ballots. There were eight spoilt ballots.

Early on, Brown Burke, whose campaign message was 'Portia's Choice - The People's Choice', admitted that winning the contest would have been "extremely difficult" without Simpson Miller's support.

"The other candidate is a sitting councillor. She was constituency secretary, and many people don't know me as closely as you would want at this time. But I would not have wanted to do it without

her (Simpson Miller's) endorsement," she told The Gleaner.

The backdrop to the selection exercise had a lot to do with what many believe is the jostling in the party for the leadership after the current president, Dr Peter Phillips, departs. That has seen talks emerge about a Peter Bunting camp and another for Phillip Paulwell.

That Bunting and Lisa Hanna from the 'renewal wing' supported Smith Facey did not help to quiet the talks. Paulwell was a key supporter of Brown Burke.

Little was said explicitly yesterday, but much still came from the rhetoric before and after the selection exercise at the Caribbean Palms Community Centre off Spanish Town Road in the safest PNP constituency.

"I think it is important that we have someone that will protect the interest of all the people," Simpson Miller said after being asked why it was important that Brown Burke was selected over the candidate who has been a councillor in the constituency.

Pressed on who the constituency needed protection from, Simpson Miller added: "I don't know why you asking me that question."

But, she warned: "If Angela joke, when I finish with har, she will want to run away."

Meanwhile, Paulwell dismissed speculation that he was in a chess game to set up his leadership bid.

"Let me be clear about this: Comrade Peter Phillips is the leader of the party, and I am pledging today that I will do nothing, as long as he remains leader, to, in any way, undermine or challenge," he told The Gleaner.

Brown Burke is councillor for the Norman Gardens division in the Kingston Eastern and Port Royal constituency represented by Paulwell.

She is expected to announce her resignation as a senator and councillor after Prime Minister Andrew Holness announces the date for the election.