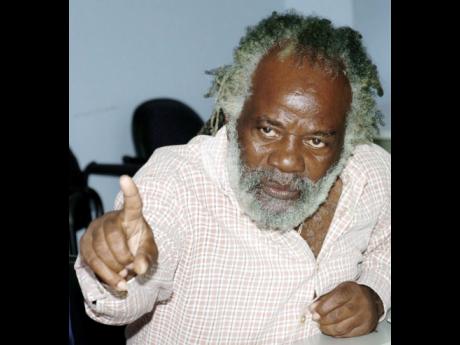 With battle lines now drawn, social activist O. Dave Allen, who is representing business operators at the People's Arcade in Montego Bay, says the Jamaica Railway Corporation (JRC) is on a mission to disenfranchise them.

During a recent meeting between the JRC and the arcade's shop operators to outline concerns about sanitation and security issues and a long-term plan to reclaim the facility, the outspoken Allen, who also operates a studio in the arcade, accused JRC Chairman Ferris Ziadie of plotting to deprive the operators of their long-established businesses.

"What Mr Ziadie is saying, and it is in law, is that if you build on a person's property without the person's consent, what you build belongs to that person," said Allen. "So what he is saying is that, with all the money you invested in your shops, what you've built belongs to the JRC, so they are here to expropriate your property and do what they want with it, without compensation to you."

However, Allen explained that the business operators have sought legal advice and were taking steps to protect their interests.

"We have already had a caveat (a legal warning with specific conditions) on this property. We are holding on to this piece of land as our patrimony, and if it is not settled in the courts, it shall be settled in the streets," warned Allen, who wants the court to resolve the row. "If you enter into a contractual arrangement with the JRC, you lose your opportunity to own this piece of land."

... Only those squatting in arcade

will be thrown out - Ziadie

Ferris Ziadie, the Jamaica Railway Corporation (JRC), chairman is insisting that while the JRC holds the title to the property, it will not remove anyone from the arcade except squatters residing in the shops.

"The JRC has a title that says we own everything here, and you shouldn't be paying rent to anybody but the JRC. But we are not going to dislocate anybody from here except those who are living here," said Ziadie.

Former mayor of Montego Bay, the late Arthur Gilchrist, was behind the creation of The People's Arcade in 1996. It was created to accommodate dislocated street vendors who were asked to leave the streets to pave the way for the Inter-American Development Bank (IADB)-funded Montego Bay South Gully Drainage Improvement Project, to which the Ministry of Transport, Works and Housing was the implementing agency.