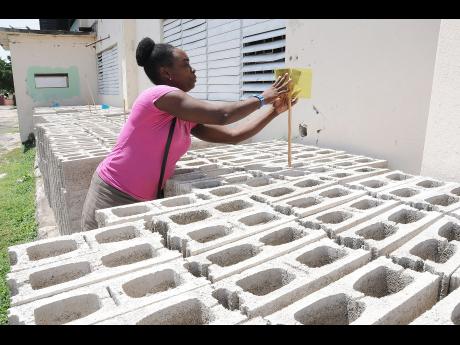 Lionel Rookwood
Veronica Ashman-Josephs of the Miracle Tabernacle Foundation points to several of the blocks that are ready to be sold. 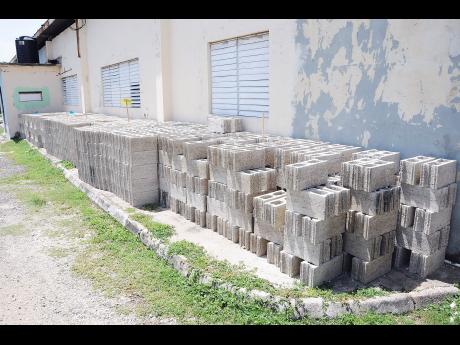 Lionel Rookwood
Several of the blocks manufactured by the Miracle Tabernacle Foundation which cannot be sold because the entity is yet to receive the okay from the Bureau of Standards Jamaica.
1
2

Several residents of the tough inner-city community of Olympic Gardens could struggle to meet their back-to-school expenses as their main employer, a block-making business spearheaded by the Miracle Tabernacle Foundation (MTF), has been shuttered while it waits to be registered by the Bureau of Standards Jamaica (BSJ).

This has left the church-run business in limbo as it has more than 4,000 blocks, which it manufactured based on orders, but cannot deliver them or collect for them because it has not been given the stamp of approval by the BSJ.

According to the MTF, while it waits for its block-making operations to be registered, it is losing customers, missing out on thousands of dollars in revenue and unable to fulfil its commitment of providing employment for the residents.

"We are losing roughly $400,000 per month as we have lost revenue and clients," said John Hardy, manager of the MTF.

"We have had to turn away our clients because we want to keep up with the regulations of the Bureau of Standards, and these customers are going elsewhere," added Hardy.

He noted that the lull in operations at the block-making factory was becoming a source of frustration for residents of the tough west central St Andrew community.

The MTF started its block-making operation, which is registered with the Companies Office of Jamaica, in 2003. It was forced to shutter the business in 2012 due to the downturn in the construction industry.

With the revival in the industry, the operation was resumed last year but was stopped in its tracks by the BSJ, which ruled that all block-making companies had to be registered.

"We have spent about $200,000 to recalibrate our machines, and that took us a little time because we had to be generating funds, and now that we have finished, we haven't been able to sell any blocks as yet," Hardy lamented.

He said the non-operation of the block-making factory, which is the MTF's major income generator, has also taken a toll on other businesses run by the organisation.

"The block factory is like the flagship of the foundation. So when it is non-functional, it inhibits all the other departments that need funding," said Hardy.

"We operate a call centre, and we need some funds to fuel it. We have a number of things that we need to put in place. We have a contract with an outsourcing company in the Philippines that we should start working with Monday (tomorrow) coming, but we don't have enough funds to get the agents going.

"We are trying to complete our woodwork shop, and just the electrical installation is left. If we were selling blocks, we would have been able to complete the woodwork department and start accepting orders," said Hardy as he again expressed displeasure with the BSJ.

But late last week, the BSJ, in an emailed response to questions from The Sunday Gleaner, said it was not to be blamed.

"Our records indicate that the application from Miracle Tabernacle Foundation Block Making Factory was received on July 15, 2017, and their samples were collected on July 17, 2017," said the BSJ in its response.

"At the time of collection, their samples were two days old and would not have been valid for testing since blocks require curing for 28 days to facilitate proper testing," added the BSJ.

The state agency admitted that its' block-testing machine had been out of operation for a week but said it has since been repaired.

The bureau also issued a reminder that all block-makers are legally required to be registered and urged Jamaicans to "request the registration certificate and or verify with the National Compliance and Regulatory Authority or the BSJ before purchasing blocks".