Learning on a Battlefield | Crisis in the Corporate Area 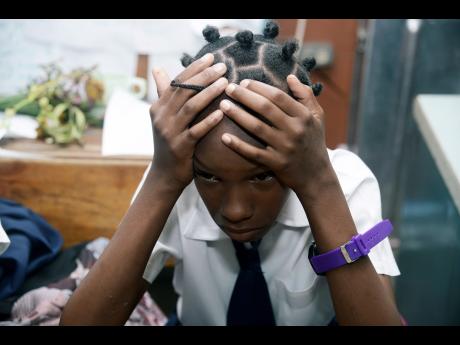 Norman Grindley
Eleven-year-old Kiandra Williams, a student of the Holy Family Primary School, mourns her classmate Taysha Hughes, who was murdered by gunmen in June. 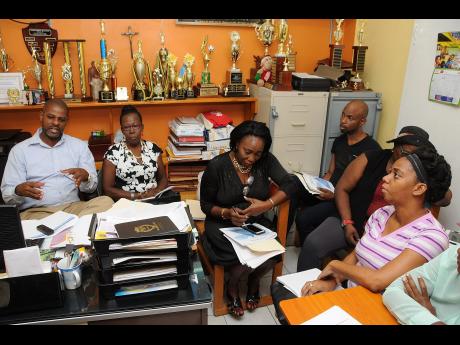 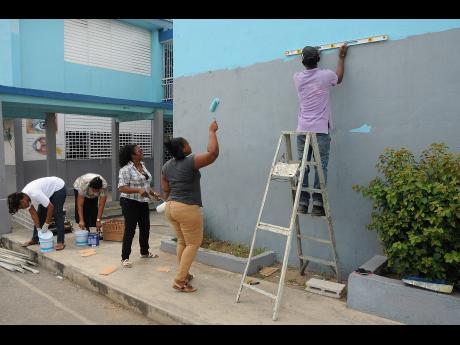 Lionel Rookwood
Teachers from Maverley Primary School help to paint and clean the walls of the institution in the community which has been rocked by gang violence in the past two months.
1
2
3

From Rockfort to Maverley in the Corporate Area, to Glendevon and Mount Salem in St James, Farm/Effortville in Clarendon, and several other communities across the island, Jamaican students will turn out for the new school year tomorrow on battlefields where criminals are running riot.

Last year Professor Emeritus in the School of Education at the University of the West Indies, Errol Miller, raised concerns about what he describes as the crippling effects of violence on the educational outcomes of students.

At that time Miller warmed: "Children, including boys and girls, living in communities with high percentage of violence, is a special issue that needs to be taken up because the brutality of those circumstances seem to have a tremendous effect on them and sometimes they develop a short view of their lifespan.

Last week members of our news team visited some of these schools. These are their stories.

A call for more guidance counsellors and increased support from parents topped the list of concerns at the Holy Family Primary School in central Kingston last week as administrators prepared for the start of the new academic year in one of the island's most volatile communities.

In June, a student at the school, 11-year-old Taysha Hughes, was gunned down when thugs sprayed bullets at a group of people on Fleet Street metres from the school, and despite the merriment of the summer holidays, teachers there are convinced that some of the children are still haunted by that incident.

"The children, who are our main priority, have been adversely affected. The guidance department has a hard task dealing with the students who suffered from this trauma, and we are still grappling with that," said Christopher Wright, principal of the Holy Family Primary School.

"Guidance counsellors are woefully lacking. We have two. Some will say that is enough, but really, it is not. I couldn't put a number to a figure that would be sufficient," added Wright.

He told our news team that some students overtly speak of their fear of the volatile communities in which they live, while others covertly express themselves, acting out with deviant behaviour.

"They have short attention span, they are quarrelsome sometimes, they use a lot of curse words at teachers and some of them cannot stay in their seats," said Marcia Richards, one of the guidance counsellors.

Richards was one of the teachers gathered in Wright's office making plans for the upcoming school year when our news team visited last Wednesday.

The situation was similar at the Maverley Primary and Junior High School when our news team visited.

The northwest St Andrew community has been under the gun in recent weeks, with at least five persons murdered, several left nursing gunshot wounds and houses firebombed.

"The violence has adversely affected us. We have noticed that some persons have called asking for transfers ... some persons have relocated because of the conflict," said Dona-Marie Sewell, vice-principal at the school.

"Thankfully, it doesn't spill over on to the compound. Students are affected because they live in the area where the violence is, but still children come to school. We have never had to close the school because of the violence," added Sewell.

She said while the school's staff is getting ready for the new school year they remain concerned about the level of violence.

In the east Kingston community of Rockfort, criminals have been on a murderous spree all summer, and administrators at schools in the area are bracing for the fallout.

Last week, Jacqueline Lewis, principal of Rennock Lodge All-Age, and Lexford Johnson, principal of Norman Gardens Primary and Junior High schools, met with their staffs and members of their safety and security teams to discuss strategies for the new school year.

Many of the students of the two schools are from the areas where the violence has been at its worst, with some parents already moving out of the community.

Learning on a Battlefield | Students' safety concerns in MoBay