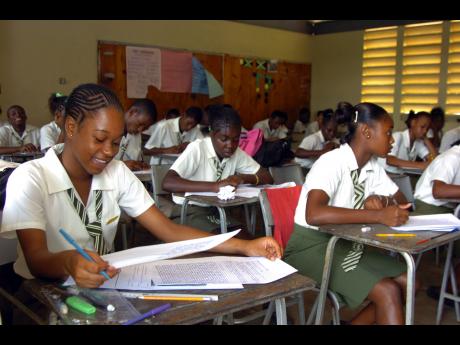 The day recognised as 'September Morning' by many Jamaicans brought mixed feelings among parents, teachers and students across schools in the parish on Monday, as classes resumed after a two-month hiatus.

While tears and tantrums flowed from some of the newbies who were attending school for the very first time at some institutions, the administrators at other schools were pleased that the preparation process they started weeks ago has given them a smooth transition into the new school year.

"We started two weeks before with meetings and workshops, and then we had the grade one students coming in last week for orientation. Each class had a list of the things the students need, and the parents came in and were very supportive," reported acting principal at the McIntosh Memorial Primary School, Vyonnie Whines.

She added that their only need is that of more furniture.

"We have created two additional classrooms with the open spaces we had and the children are settled. The only problem we are having right now is with furniture. So far, I see where I need 25 more benches, but apart from that, the major of things are in place. The canteen is up and running," said Whines.

Similarly, principal at the Mile Gully High School, Claudette Robinson-Shaw, had a good first day but the school is in need of more furniture.

"We were promised some furniture, so we are waiting to see. We are in need of about 100 additional desks and chairs, and we were told that we will receive them this week, so we are waiting. Outside of that, all is fine at Mile Gully," she said.

With yesterday being the first day off the shift system for Mandeville Primary School, principal Howard Salmon said, "We had to meet with our parents from as early as July 10. We sent out approximately 2,000 text messages to parents informing them of the changes as it relates to the school now being an all-day institution. I have been preparing for today for the past year. The school is as I expected it and as God created it."

Salmon revealed that the school has since implemented an after-school care programme for those who are unable to leave work before 5 p.m. to pick up their children. He says this comes at a cost of $100 per day.

He further mentioned that since the institution is no longer on the shift system, parents will no longer be able to drop off and pick up students on the school compound because of limited parking space. Therefore, the vendors who occupy the lay-by will need to relocate.