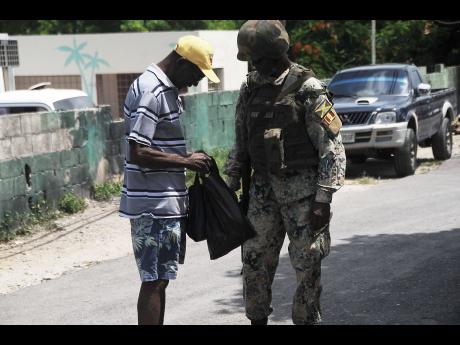 Adrian Frater
A soldier conducting a search during the zone of special operations in Mount Salem in Montego Bay, St James.

With just hours to go before the five-day grace period for illegal weapons found on premises in Mount Salem, St James, ended yesterday, it would appear that the offer, which was made by Prime Minister Andrew Holness, fell flat as the security forces found only one gun.

Following a tour of Mount Salem on Sunday, which was declared the nation's first zone of special operations last Friday, Prime Minister Holness outlined a raft of measures, which he said was designed to cripple the horrifying lawlessness that has resulted in more than 1,000 murders islandwide, including more than 300 in western Jamaica, since the start of the year.

In encouraging citizens to buy into the initiatives, the prime minister said that during the grace period, persons on whose premises guns were found would not be charged unless it was subsequently found that the guns had been used in the commission of a crime and that the person who used it could be identified.

"This is being done to encourage the citizens to work with the security forces and tell them where the guns are," said Holness, who noted that after the five days, the police would be returning to the strict application of the law.

It is unclear as to whether there was any citizen input in the one illegal gun, which was reportedly found in an open lot in the Piggott Street section of Mount Salem on Wednesday.

However, while the grace period has seemingly failed to stimulate much response, the gun recovery programme, which offers cash for the seizure of guns, ammunition and explosives, seems to be going very well, based on reports from Crime Stop.

"We have been receiving a lot of calls," said Prudence Gentles, the manager of Crime Stop, the entity through which the gun-recovery programme is being handled. "The programme has nothing to do with the grace period in Mount Salem, which is under the zone of special operations. It is islandwide and ongoing."

Quizzed as to whether the level of response was normal, Gentles all but described it as overwhelming.

"It is far more than the usual number of calls we are accustomed to getting," she said. "I would describe the level of response as being very good."

The prime minister outlined how the rewards for the gun-recovery programme would be administered, using the following scheme:

- Explosive - negotiable based on amount

- Ammunition - negotiable based on quantity

In addition to the gun recovery programme, Holness also announced a $20 million fugitive apprehension scheme, which is aimed at the country's top 20 criminals.

"We will be identifying the top 20 violence producers in Jamaica, and we will be offering $1 million for each of them," said Holness, noting that that programme would also be managed by Crime Stop. "The list will be published by the security forces in short order."