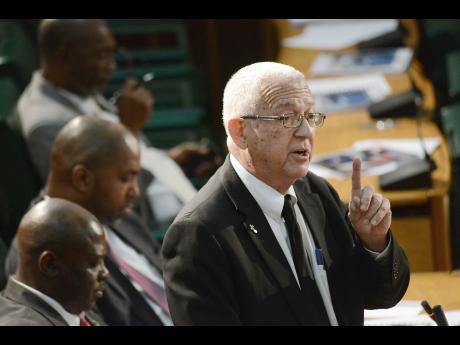 The Ronald Thwaites-chaired Human Resources and Social Development Committee of Parliament last week called for urgency in the development of tobacco-control legislation which would, among other things, force companies to detail the perils of smoking.

This follows the 2013 legislation banning smoking in public places, during the tenure of then Health Minister Dr Fenton Ferguson, who is also a member of the committee.

"The thing about the billboard is that until we have the comprehensive tobacco-control legislation in place, there is actually no law prohibiting tobacco advertising, sponsorship and promotions," said Deborah Chen, executive director of the Heart Foundation of Jamaica but who was also representing the Jamaica Coalition for Tobacco Control.

Chen who was referencing a Hope Road billboard advertising smoking, said some time ago, there was a gentleman's agreement between main tobacco players at the time, and the Ministry of Health, not to erect billboards. However, new players entered the market, post the agreement and began advertising other brands. It forced the end to the gentleman's agreement as the main players did not want to lose market share, Chen said.

"The truth is that right now, there is no legislation to ban the use of billboards, and that's one of the reasons why your (Ferguson's) question is so important as to where we are on the question of legislation," said Chen.

Thwaites said he hoped the Ministry of Health would take immediate steps, despite some deficiencies, to ensure that the companies would be encouraged to act in the interest of Jamaica.

Permanent Secretary in the Ministry of Health (MOH), Sancia Templer, said that the MOH would try again to get tobacco companies to publicise the dangers of smoking.

Meanwhile, Ronald Thwaites, chair of the Human Resources and Social Development Committee of Parliament that she was addressing, said, "We should name and shame them!"

"Things such as control in terms of advertising have to be done within the legislation, but I agree that perhaps more efforts can be made in terms of moral suasion," said Templer.

Committee member Dr Lynvale Bloomfield said it was worrisome that many persons did not perceive smoking to be dangerous, given the damage it has done globally. He said that it was especially troubling, considering the data presented by the National Council on Drug Abuse, which showed increased percentages of smokers across all age groups, including among children, that more information was not in the public space.

The committee was told that for all of the lung cancer cases, 80-90 per cent were linked to smoking. It was also pointed out that some of medicinal ganja usage involved smoking.