Greater scrutiny for FLA and all other National Security Agencies 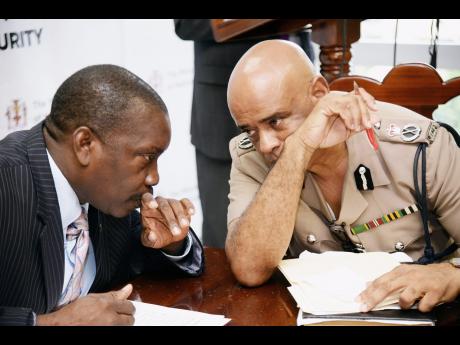 Greater scrutiny now applies to all government agencies that fall under the banner of national security, such as the Firearm Licensing Authority (FLA), the Jamaica Constabulary Force, and the Passport Immigration and Citizenship Agency (PICA).

This follows yesterday's launch of the security ministry's, Security Programme Oversight Committee, at its head offices in St Andrew.

Commissioner of Police George Quallo and Chief Executive Officer at the FLA Shane Dalling were among the heads of agencies in attendance.

Permanent Secretary Dianne McIntosh said the alarming homicide rate was one of the determining factors leading to the committee's existence.

"Importantly, the current crime situation has emphasised a need for us to review our current approach and strategies in confronting crime, to ensure implementation of effective and practical systems, [leading] to the security and safety of citizens."

According to Minister of National Security Robert Montague, the committee will ensure that security targets are continually met.

"This committee is set up to make sure policies and targets agreed on are implemented. All agencies have their targets and work plans. They were submitted and collated, and the committee's job is to ensure that all these targets within the national security architecture are met; it is estimated that crime costs the country five per cent of its GDP. When you work that out into real numbers, you are looking at $70 billion-plus," Montague said.

He stressed that the new

15-member team will be responsible for ensuring whatever recommendations are made by the George Overton oversight committee are put into action.

Retired banker Peter Moses was appointed chairman of the committee, which will ensure, among other things, that the correctional services increase its farming and agricultural production by 20 per cent.

One hundred per cent of juvenile wards and 80 per cent of adult inmates are to be enrolled in life skills rehabilitation programmes.

The FLA will have to deliver an efficient licensing regime for the private firearms industry. Ninety per cent of new applications for licences, certificates and permits should be decided on within a 12-month period, and 90 per cent of licence renewals should take no more than 25 minutes.

All complaints of breaches of licence and permits must be investigated by the committee.