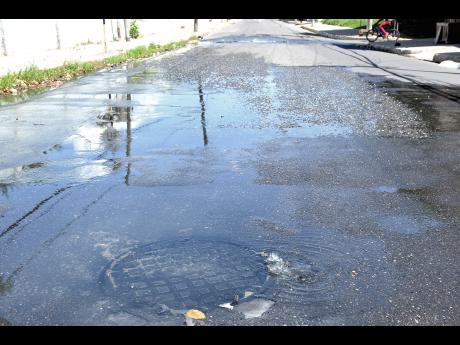 Norman Grindley
Once again sewage flows from this manhole on North Street by Price Lane, Kingston.

Millions of dollars have been pumped into the North Street sewer line repair project in Kingston, but to little avail, as raw sewerage has begun to overflow on to the roadway once more in the vicinity of St George's College, with the only difference being that it hasn't been running on to residents' premises anymore.

Member of Parliament for the area Ronald Thwaites yesterday asserted that the main cause of the problem is as a result of industrial waste getting into and clogging the system. The problem, he said, has persisted for years.

"Industrial waste comes down and clogs the system no matter how much they repair it. It comes down from the Arnold Road area particularly, and the system is being asked to bear a load it cannot. There have been two efforts. One was manifestly unsuccessful and had to be redone, and I am extremely disappointed," Thwaites told The Gleaner.

Horace Chang, minister without portfolio in the Ministry of Economic Growth and Job Creation with responsibility for water, works and housing, yesterday admitted having knowledge of industrial waste being a possible cause for the blockage and overflow but stressed that the problem was usually heightened due to excessive rainfall.

"In this rainy season, once you get rainwater into the sewer, it's likely to flood. There was a charge that (industrial waste was the cause), but I suspect that in this current atmosphere, it is more floodwaters getting in there," Chang said.

"The entire line is defective, and the real chance is that it is going to have to be changed. Once you get a heavy flow, you get a back-up. For repairs, we spent about $20 million the last time, but on several other occasions, we have spent $5-10 million doing different things on that road. To be corrected, it requires about $500 million, and that is to change the entire line," he said.

He opted not to give a timeline for when the money would become available to do an entire fix of the North Street sewer line but affirmed that it would be done.