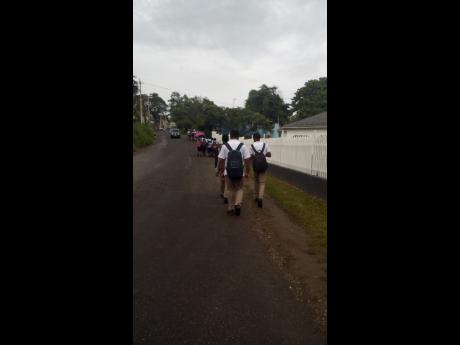 Residents joined transport operators who ply the Linstead to Bog Walk route in blocking the road with trees, old tyres and other debris, causing a shutdown of the commute between the two townships yesterday. The roadblock, which extended the entire three-mile stretch from Bog Walk to Linstead, forced the suspension of classes at Dinthill Technical High School.

A representative of the Linstead Taxi Association, Glendon Abrahams, told The Gleaner that the authorities have failed to respond to repeated requests to repair the roadway, which has been causing them undue hardship.

"We blocked the road because it is in a terrible condition. All we are getting is empty promises. Repairs to our vehicles are costing more than what we are making," he said while vowing to continue mounting roadblocks until something is done.

Meanwhile, dean of students affair at Dinthill, Wentworth Kelly, said that the school was forced to suspend classes in order to give students and teachers an opportunity to go home before dark.

"The roadblock has affected the school community in that teachers were unable to come to school," he said.

"Students had to walk long distances to get to school, so the school has been affected severely, hence the decision to send the students home," Kelly told The Gleaner.

Sixth-form student at Dinthill, Allison Lewis, said that the roadblock, affected them negatively.

"We were drastically affected by the roadblock. School closed at 9:30 a.m., and we had to walk in the bushes to get by the blockage."

Lewis said that exams that were scheduled for yesterday had to be postponed.

Many residents who had to conduct business in Linstead and Bog Walk could be seen walking the three-mile stretch to get to their destinations.

Up to late afternoon, a crew from the National Works Agency (NWA) was working along with a detachment of police from St Catherine North to clear the roadblock.

"This is a daunting task; as we clear a section, they block it again," stated one of the NWA workmen, adding that it is difficult to monitor them because of the long stretch of road.

"This section of the road has been bad for quite some time; it is in a deplorable condition," Abrahams stated.

"I have been making representation at the municipal meeting for the last three years for some attention to be paid to the road but I have been told constantly that it is a National Works Agency road."

Abrahams said some half-measures were employed by the NWA to do patching along the road but this has not held up to the heavy rains.