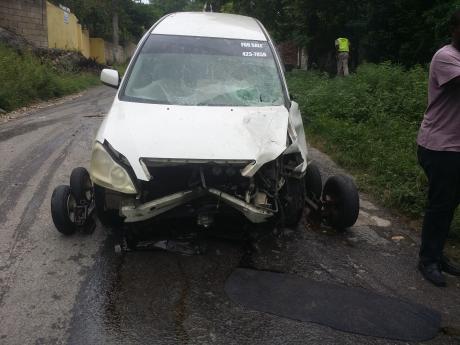 Adrian Frater
The motor car involved in the accident in which four people were mowed down leaving two dead, in Glendevon, St James, yesterday.

A 15-year-old schoolgirl of Green Pond High and a senior citizen were killed yesterday morning when they were mowed down by a speeding Toyota Ipsum all-purpose vehicle in Glendevon, St James. The dead child's mother and her sister also suffered injuries in the incident.

The deceased persons were identified by residents as Shantae Rose, a grade 10 student, and a man known only as 'Shorty', a veteran compressor operator. Rose's mother, Tatiana Foster, and her 13-year-old sister, Shamica Rose, both sustained serious injuries.

According to eyewitnesses to the accident, shortly before 8 a.m., Foster was accompanying her two daughters to a taxi stand when, on reaching the intersection of Felicity Road (Blood Lane) and the main road from Norwood, a Toyota Ipsum, which was reportedly speeding, overtook another vehicle and mowed down the mother and daughters.

"After it lick dem (the mother and daughters) down, the driver increased speed and was getting away when the vehicle hit 'Shorty' further down the road," explained a resident. "Shorty was trapped under the vehicle and it drag him fe about a chain before crash into a stone heap and stopped."

While some residents ran to assist the mother and her daughters, others chased after the vehicle, which was reportedly being driven by a nurse. When the vehicle finally came to a stop, the terrified female driver jumped out of the vehicle and fled the scene.

"When she jump out of the vehicle, she ran around the vehicle about three times, bawling out, 'Don't kill me ... don't kill me ...' She then run off," said another resident. "When we look round, me see Shorty on the ground tear up ... it was a terrible sight."

Weeping mother: It is a miracle that we survived

When The Gleaner visited Cornwall Regional Hospital, where the mother and daughter who survived yesterday's motor vehicle accident were taken, the weeping mother said it was a miracle that she and her younger daughter survived.

"We get hit from behind on the right-hand side of the road," said Foster, who suffered injuries to her shoulder, head and mouth. "Me daughter dead ... her face mash up ... . From I look inna her face, me know she gone ... dead because this woman decide fi speed."

Courtney Rose, father of the deceased child, who rushed to the hospital after he got the news, was a nervous wreck, calling out his daughter's name as he cried.

"Look how dis woman kill off mi daughter," wailed the father, as friends gave him rum to drink to calm him down. "What kind a hurry she inna so that she affe a speed downhill and a overtake an intersection ... . Right now me not even know if mi next daughter go mek it."

Efforts to get a comment from the police proved futile, as a source at the traffic department said that the investigators were still compiling their report.