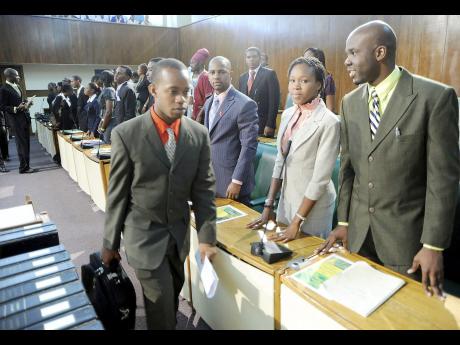 Rudolph Brown
In this file photo, Gonzall Palmer, deputy speaker of the House walks to his seat as the seventh sitting of the National Youth Parliament is convened at Gordon House.

As part of their one-year tenure, 100 national youth parliamentarians will be assigned to constituencies from which they are tasked with conceptualising and executing community-service project.

The project to be partially funded by the Government will also see the cohort of youngsters working alongside serving members of parliament.

This particular reform of the National Youth Parliament, according to State Minister for Education, Youth and Information, Floyd Green, will add substance to the Parliament, as the appointees will have a platform from which to engage youth islandwide and relay feedback to the Government.

"We want the youth parliamentarians to get a greater feel of what it really means to be a parliamentarian. We're not just moving towards the act of going to Parliament and presenting, but also that of serving in the community, which is really what a parliamentarian should be about, giving service and representing people," said Green, while noting that the appointees can engage partners during the nine-month period in which the project should be completed.

Up from 74 appointees last year, the group underwent an orientation/workshop at the University of Technology on Saturday, where they were given an overview of the youth parliament.

The youngsters also elected county chairpersons who will spearhead the projects throughout the three counties.

Green also pointed out that a strategic change to this year's programme is that the cohort will be afforded significantly more time before presenting in Parliament.

Last year's crop was appointed in September and made presentation at a sitting of Parliament in November.

The current batch of youth parliamentarians will be officially appointed on November 27, during an Investiture Ceremony at the Jamaica Conference Centre.

They will present to the Parliament in November 2018.

"One of the things we did pick up last year is that some of the good ideas were already being implemented and we believe that is because the parliamentarians never had as much time to delve into what the Government was doing," said state minister for education, youth and information, Floyd Green. "As such, they wouldn't have had the benefit of being able to critique what Government was doing in an effort to make it better or make suggestions that were not yet being considered. So, we wanted to develop a programme which would enable them to make a more fulsome presentation to the Parliament while also sharpening parliamentary procedure skills, research on the relevant topics, and also strengthen their public speaking," Green explained, while indicating that last year's presentation had merits.

"At the ceremony this year, I plan to outline some of the proposals that came from the previous Parliament because they have impacted Government. So, for us, it's definitely not symbolism but substance," Green added.