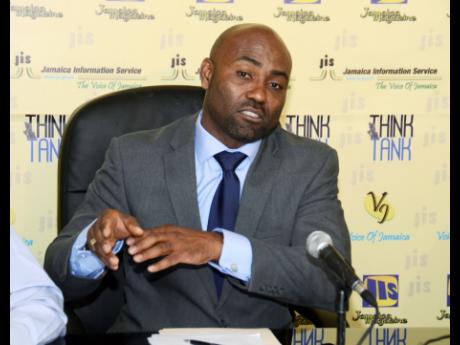 The Jamaican Government is considering purchasing the 49 per cent shares in Petrojam owned by Venezuelan state-owned oil company PDVSA, as concerns mount among banks locally and overseas over an executive order issued by United States President Donald Trump in August this year. The order imposes restrictions on government entities in the South American country.

"This Government must now proceed to take the necessary steps to safeguard the viability of our assets, even as we recognise value and appreciate the support provided to this country by the Bolivarian Republic of Venezuela," declared Dr Andrew Wheatley, minister of science, technology and energy.

The Jamaican Government has controlling interest in Petrojam with 51 per cent ownership of shares in the state-run company.

In August, the US president issued Executive Order 13808, referred to as EO.

In a statement to the Lower House, Wheatley told his parliamentary colleagues that the banking sector has "adopted an extremely conservative interpretation of, and approach to, implementing the provisions of the EO".

Two weeks after Trump issued the executive order, Petrojam started to receive enquiries from its financiers and bankers regarding its relationship with PDVSA, particularly in relation to the dividend policy, governance structure, and controlling authorities. Queries were also made in relation to the purpose for payments to PDVSA.

Wheatley divulged that since the executive order was issued, payments to and from Petrojam had been impacted by inordinate delays.

He said that loan payments to the Venezuelan government were withheld by the US Federal Bank and others, as they carried out due diligence. Wheatley pointed out that although the funds were later released, the vetting process has now contributed to significant processing delays.

The energy minister said delays in payments have caused a level of unease between Petrojam and its suppliers. However, he said that efforts were being made to prevent any form of disruption to the country's energy security.

Jamaica and Venezuela signed a joint-venture agreement in 2006 and a pact in 2017 for the upgrading of Petrojam's refinery.

Wheatley said Jamaica's minister of foreign affairs met with the US assistant secretary of state in September to seek the intervention of the US Department of State.

According to Wheatley, the Government is now seeking further intervention at the highest diplomatic level in Washington.

On the question of oil supplies Jamaica is receiving from Venezuela, Wheatley said for more than a year now, the country has only received minimal or no crude product from the South American country under the PetroCaribe agreement.

Yesterday, The Associated Press (AP) quoted ratings agency Standard & Poor's as saying that Venezuela has defaulted on its debt after it failed to make payments due on some of its bonds.

The agency said yesterday it was downgrading Venezuela's sovereign debt grade to SD - short for 'selective default', which means the country decided to skip a payment on a specific bond but was overall still committed to honouring its international debts. Previously, it had Venezuela in junk-bond status, The AP said.