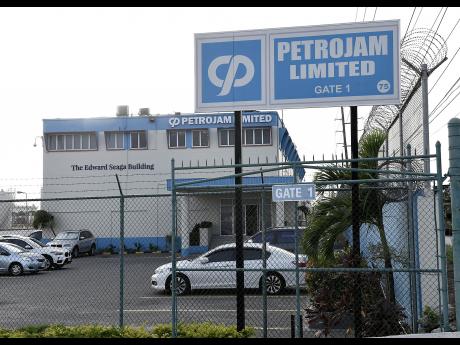 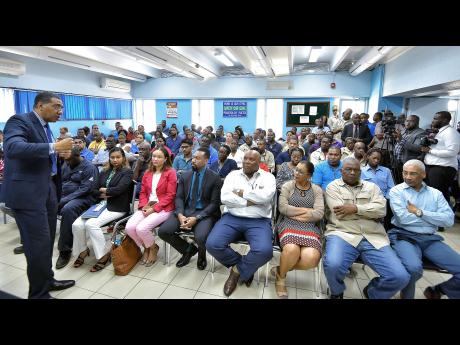 Contributed
In this July 31, photo, Prime Minister Andrew Holness (standing), addresses management and staff members of Petrojam, after he took control of the energy portfolio.
1
2

The current management of the state-owned oil refinery Petrojam has launched a probe into the expenditure of J$1.4 million (US$10,500) to host a premium party during a strategic planning retreat last September.

The party, held at Palms at Palmyra in Montego Bay, St James, catered for 25 guests, and was included in the expenditure the refinery claimed as part of the spend on its strategic planning retreat from September 20 to 23 at Hyatt Ziva Rose Hall.

Last month, The Gleaner obtained copies of invoices related to the retreat through an Access to Information request, and Petrojam took just over one month to respond to follow-up questions from our news team.

The party was held the day before the official retreat, with sources claiming that it was a birthday celebration for a then senior member of the management team.

Last week, Petrojam said it could not respond to questions on why the party was held, and who were the guests. "The matter is currently under investigation," said the management in response to questions from our news team, as it underscored that parties are not a regular fixture of its strategic planning retreats.

"As it relates to the participants in the management retreat, participants included the then minister of science, energy and technology (Dr Andrew Wheatley); the then chairman (Dr Perceval Bahado-Singh); the group general manager of Petroleum Corporation of Jamaica; the directors of Petrojam, including directors from PDVSA, Venezuela, members of Petrojam's senior management and supervisors," said the company.

Based on the invoices released by Petrojam to The Gleaner, the party was coordinated by Rose Hall Developments Limited, but there was no documentation to indicate if accommodation was provided for guests after the party.

At the time of the initial report, a public relations and events practitioner, who has government clients, had argued that the $1.4 million bill for 25 guests was a standard price for a premium VIP event. But he said the purpose of the party should be the area of focus.

"The bigger picture is - why is a government entity spending this amount of money? Was this the best spend of our resources, and what are other government entities doing for VIP hosting?" said the event planner.

The company also spent a little under J$5 million (US$37,827) for accommodation, food and a board of directors meeting.

It addition, it paid more than $17 million (US$132,162) to an American company to provide 'Balanced Scorecard Training and Strategic Development'. A balanced scorecard is a tool used by businesses and governments across the globe to set and measure targets effectively.

According to Petrojam, the American company, the Balanced Scorecard Institute, was directly contracted as its 'Nine Steps to Success' methodology is copyrighted and it is only offered by them or an approved partner.

Training was provided to 20 managers and supervisors who also received certification.

"If the 20 participants were to be sent overseas for the training, the total cost would have been US$2,950 in addition to the cost for airfare, per diem and accommodation," argued Petrojam.

Wheatley, Bahado-Singh and the other Jamaican board directors have since resigned.

The general manager, Floyd Grindley, also resigned in the wake of the allegations.