Of flooding, horror stories and heroics - the dramatic events that unfolded in Montego Bay 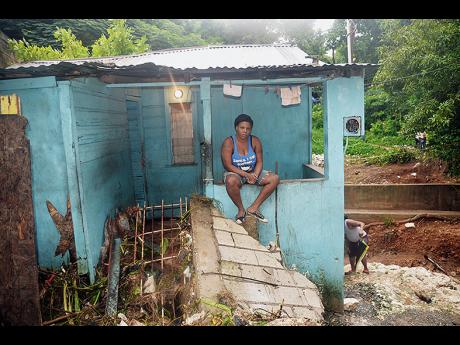 Adrian Frater
Roxanne Bennett sits on what remains of her house on King Street in Montego Bay, St James, after all her belongings were washed away in the flood rain. 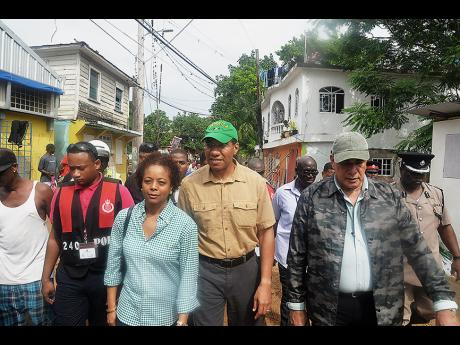 It was devastation on a scale never seen before as residents of Montego Bay, St James, yesterday got a chance to view the significant destruction caused by Wednesday's horrific flood rains, which damaged roads, destroyed numerous houses, and left the downtown section of the city covered in mud.

"I have been living here for over 50 years and is the first I am seeing anything like this," said Mark Bernard, who resides in North Gully.

"The water came up out of the drain and lock mi gate. Me couldn't come out a mi yard. Me haffi tek refuge on mi roof. It was much worse than the 1963 flood, which was also quite terrible."

As The Gleaner team travelled around the western city yesterday, we were bombarded with countless horror stories of persons being trapped in the fast-moving flood waters and being saved by brave individuals who risked their own lives to save them.

Janise Stephenson, a resident of Albion Lane, is thankful to be alive, albeit battered and bruised after being hit by a floating refrigerator, which caused her to be trapped in the fast-moving water.

"Di water from the gully come over and flood out we house, so we out deh a wonder what we a guh do when a refrigerator come from nowhere and lick me down. Then di water start drag me weh," said Stephenson, who suffered bruises all over her body.

"Luckily, youth risk him life and come out inna di water and grab me. It was a big struggle fi we get get back inna de house."

The water that almost dragged Stephenson away completely washed away several houses as their television sets, refrigerators, washing machines, beds, dressers and even cars that were parked outside were washed away. Luckily for some residents, they were able to climb on to the roofs of their homes.

"We had to climb on di roof dem," said Andrew Brown, who was hailed as one of several heroes in Albion Lane. "We had to drop down ropes to pull up di people who couldn't climb up on dem own.

"It is a good thing that it happened during the day because if it was night, you would now be counting bodies on the Dump Up Beach," added Brown.

Roxanna Bennett of King Street must be counting her lucky stars today as she just managed to rescue her two children before her house was washed away, leaving just the veranda. All her belongings, including important documents, were lost.

"Me lose everything inna mi house. Mi flat-screen TV, one next big-back TV, me pickney dem age paper, mi pickney dem clothes, everything," said Bennett, who was at another location when she realised that her house was being threatened by the flood waters.

"While the house was tearing down, me run right in deh and grab up mi two pickney dem. A old man who live inna di yard help me fi get dem out in time," said Bennett.

As The Gleaner team moved along the gully course, the team was greeted by numerous smashed-up household items, cars, and even pieces of roofs, scattered far and wide inside the major drain, which carries water from as far away as Cornwall Courts into the Montego Bay harbour. The vast majority of belongings were lost from homes in proximity of the drain.

"We had to be out there in the rain rescuing children who got trapped in the water. It wasn't nothing normal. A several cars, including a Rav 4, that the water lift up and dump inna di gully," a young man shared as other residents heaped praises on him.

"A nuff life we save round here. Life is more important than material things."