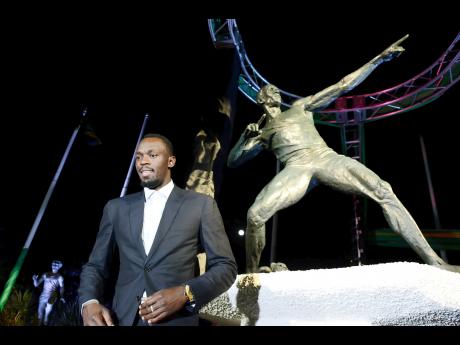 Rudolph Brown
Legendary Jamaican sprinter Usain Bolt stands in front of a statue of himself shortly after it was unveiled at the National Stadium last night. 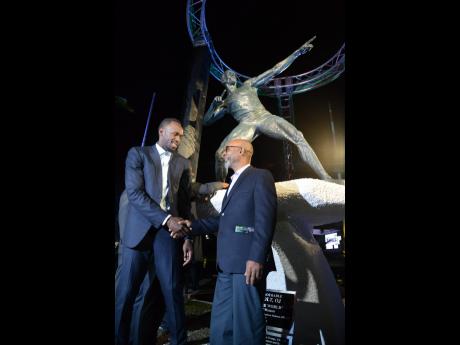 Rudolph Brown
Sculptor Basil Watson (right) shakes Usain Bolt's hand at the unveiling of the Bolt statue at the National Stadium on Sunday.
1
2

Sprint legend Usain St Leo Bolt has been immortalised in bronze with the unveiling of an eight-foot statue in his likeness at Jamaica's National Stadium yesterday, depicting his trademark 'To the World' stance.

Guest speaker Prime Minister Andrew Holness reminded the athlete that Jamaica owed him a lot for the branding capital he had given to the country.

In response, Bolt made it clear that he was still in awe of his accomplishments, which should serve as inspiration to others.

"No words to describe how I'm feeling right now. How is this even possible? Barefoot youth from country, run up and dung, drop, buck toe, all them supp'n there. I've never ever, at no point, felt that I would be in this moment, as big as it is now among statues at the National Stadium where it all began.

"This is why I always encourage everybody and this is why my motto says anything is possible, no limits. Because at no point in time I ever thought I would ever achieve this much but I've always pushed on and stayed focused for what I want."

And he was very appreciative of, and happy with, the statue.

"Mr (Basil) Watson, a great statue. I really want to thank you. You really got all details right, even my toes, which are ugly. I've really put out my hardest to make this country proud and, even though I'm retired, will always try my best to continue making my country proud. So thank you, guys, for everything. I really appreciate it."