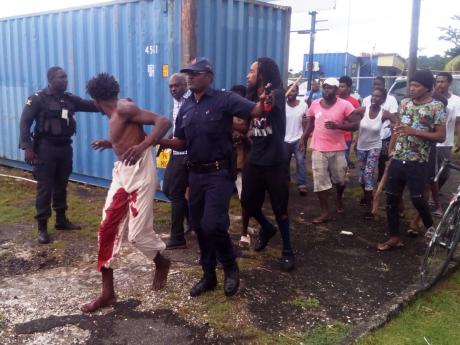 A Portland man, who is suspected to have killed a man early Monday morning, was rescued by the police from an angry mob, but not before he was badly beaten.

The man, who is believed to be a drug addict, reportedly fled the crime scene after allegedly bashing in the head of Kedron 'Tettay' Marshall with a stone.

Marshall’s body was later found in a barrel along Harris Crescent.

Hours after, news emerged that the murder suspect was spotted in a 40-foot container along Allan Avenue in Port Antonio.

He was attacked by an angry mob.

The police came to his rescue.

The situation got uglier when the lawmen started to open the door of the container and the man reportedly attacked them with a piece of iron.

He was then shot in the left leg.

The angry mob then launched an all-out attack using sticks, stones, and other implements to beat the man.

Despite being outnumbered, the police stood firm shielding the man from a number of blows and hurriedly took him onto the compound of a nearby funeral home.

Police reinforcement was called in to help the team on the ground.

The man was eventually removed from the scene and taken to hospital.