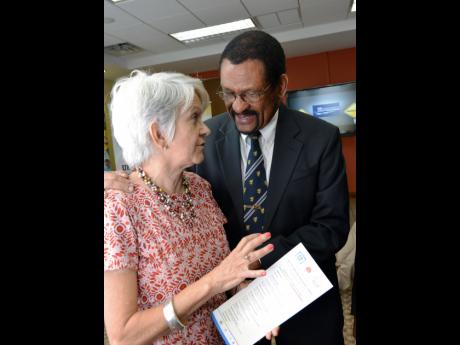 Norman Grindley
Dr Elizabeth Ward (right), head of the Violence Prevention Alliance, in discussion with Professor Trevor McCartney deputy dean, Faculty of Medical Sciences, UWI, during the launch of a study on the cost of crime and road traffic accidents to the public health sector. 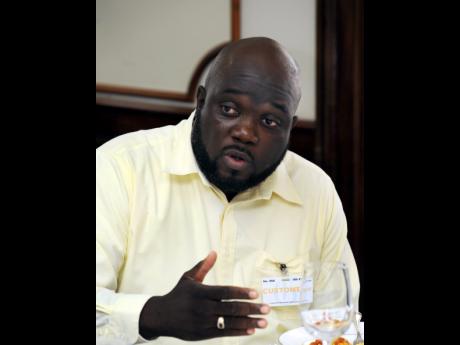 At least two violence prevention specialists are calling on the Government to invest heavily in social intervention to stem the trend of ‘known perpetrator’ violence related injuries.

Director of the Violence Prevention Alliance, Dr Elizabeth Ward, and intervention specialist with the Peace Management Initiative Milton Tomlinson, made the call in light on recently released data which showed that most violence related injuries are inflicted by persons known to the victims.

Data gathered between April and July 2014 and published recently by the Violence Prevention Alliance in Cost of Care:  The Burden Of Violence-Related Injuries and Road Traffic Crashes To The Health Care System Of Jamaica, indicated that of the 1,735 patients who were treated at seven hospitals across the island for violence related injuries 73 per cent (1,267) were injured by someone they knew.

Strangers were responsible for a mere 16 per cent of the injuries.

“I don’t think we take seriously social intervention, as more funds needs to be made available,” said Tomlinson.

“To fix it (the problem of persons resorting to violence) requires political will. We have to start with the mind, with individuals and deal with it from within. Social intervention and resolution can fix it, and the politicians need to operate according to a particular system,” added Tomlinson.

While Ward agrees that more money need to be spent on social intervention, she is adamant that there is a key role to be played by various agents within the communities.

“We have to appreciate the value of not only doing the right policing but the therapeutics that has to be offered by other groups and put resources into those kinds of activities,” said Ward.

“There has to almost be an in-house sort of approach and this is where churches and relationship councillors need to be more available and need to intervene early before the dispute gets ugly.

“Women need to get involved as though they are not perpetrators of the violence they can calm down the situation especially older women. But once the altercation goes on and the weapons get more serious this is where we find the escalation,” added Ward.

Most of the violence related injuries are said to stem from family disputes over inheritances, turf war and jostle for power within communities.

“We hold grudges long and there are a lot of long term family disputes that I understand often have to do with land and territory and grievances. So there is an altercation and they don’t know how to resolve the altercation properly,” Ward shared.

“And if more serious weapons get involved this is where we get the disruptive situation of persons ending up in the hospital.”

According to Ward, the police is not always best suited to deal with some of these disputes as different approaches are required for incidents that occur within a household and those that take place on the street.

“This is where groups like the Peace Management Initiative have been very effective at quelling community violence. Especially when they have residential camps that take them (violence producers) out of the community and get them to discuss the situation,” said Ward.

“There is also the use of sports where you put two opposing factions on the same team and get them to play together.

“Sometimes persons are hungry, they haven’t eaten for days; and they are so angry. Just them having somebody to talk to, somebody to give them a meal and from you can get that anger to come down you can often prevent the retaliation,” added Ward.

Parent or other relative – 13%