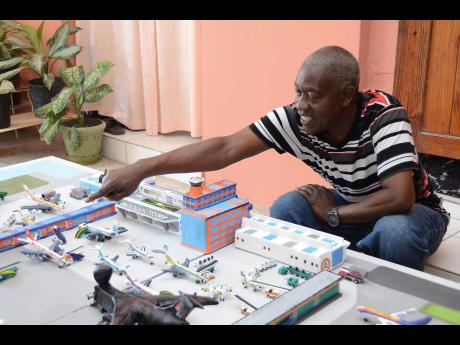 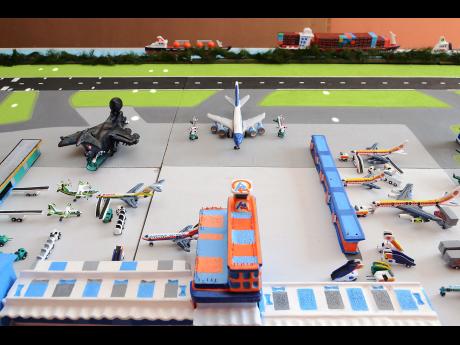 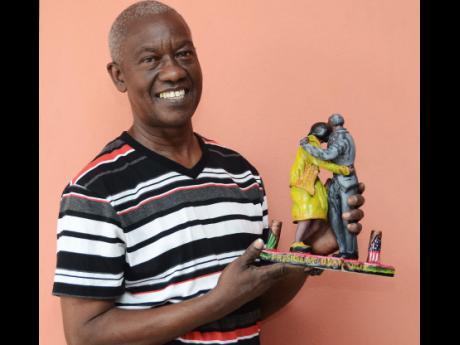 Kenyon Hemans
Egerton Brown, a self-taught potter, is all smiles as he shows off is signature piece portraying then Prime Minister Portia Simpson Miller and US President Barack Obama on his visit to Jamaica in 2015.
1
2
3

Egerton Brown can create anything his mind can conceive, using clay and match sticks and right now he is obsessed with creating airplanes.

Replicas of planes from airlines that flew into Jamaica years ago, such as Antillean Airlines, Pan Am Airways and of course, Air Jamaica, and his recreation of buses such as those which were in the Jamaica Omnibus Service fleet are only bettered by his most recent effort - the runway at the Norman Manley International Airport (NMIA).

Brown’s latest creation shows Air Force One, the official carrier of the president of the United States, taxiing down the runway and coming to a stop flanked by two helicopters.

He once described his talent as “playing music by ear” and his latest piece has transformed his verandah in the gritty Waterhouse community to a replica of the visit of then US President Barack Obama.

He also captured the first embrace between Jamaica’s then Prime Minister Portia Simpson Miller - dressed in a bright yellow outfit - and Obama.

“I have a passion for aviation, the plane world. If you notice there are mostly planes, and I have really been focused on planes that have come to Jamaica since we became independent in 1962,” Brown told The Gleaner late last week.

He said his piece of a crocodile, caught in the deadly embrace of a boa constrictor in 1986-87 holds special memories for him, because when that was sold, it bought his wife's wedding band.

Other than modes of transportation, the church deacon said he likes to create lions, because they represent strength.

He is hoping that his fingers will continue to make magic for some time to come as he plans to do miniatures of the planes which now fly into the island's two international airports.

“What I have done is create the entire airport plane area with miniatures of every single plane that has come here up to when Obama came here. You will notice the ships in the background, with the containers, this is near the Port Royal area,” said Brown.

“What I love about this platform that I have made is that I can make all types of planes and they will have a space. I have also made the walkway from the departure lounge to the aircrafts,” added Brown who has created the now dome-shaped NMIA, instead of the waving gallery which existed years ago.

With his magical fingers, he has been creating souvenirs for the tourist market and next year he plans to unveil his Midas piece - replicas of every hotel operating in Jamaica.

“They are all done, but they are not yet painted. So those will be on the market in 2018. So we are coming out with the Sandals hotels and RIU hotels in the New Year. Since the runway is out of the way, what I am making now is for the tourists in the new year,” said Brown.

His obsession with planes has also seen replicas of the original white-bodied Air Jamaica aircraft with the unbroken orange and yellow strips to the more colourful replicas, which flew under the Gordon 'Butch' Stewart-led Air Jamaica Acquisition Group – with the picture of the doctor bird at the tail.

Brown learnt his trade shortly after he left school in the late 1970s and went to what was then the Jamaica Industrial Development Corporation where he learnt the art of ceramic making.

Clay creations are fired at more than 900°F, before they are cooled and painted with acrylic paints and ready for the market.