MoBay's grim reality - From 'lotto scam' to state of emergency 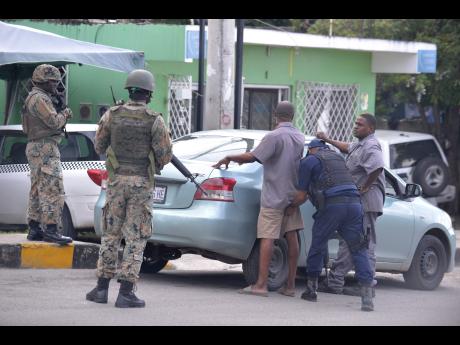 Ian Allen
A policeman conducts a search of a motorist while members of the Jamaica Defence Force look on last Friday in Flankers, St James.

The state of public emergency now in place in St James was never the desired crime-fighting option of many stakeholders, especially the major tourism players in the parish, despite 335 murders last year and 269 in 2016.

In fact, two years ago, during a period of significant violence in the parish, Omar Robinson, president of the Jamaica Hotel and Tourism Association, strongly objected to a call by

government senator Charles Sinclair for the declaration of a limited state of emergency.

"We are not in agreement with a wholesale state of emergency. It's for the police to find effective measures to solve the problems that we have. People have been calling for soldiers, (but) there are soldiers out in some of the communities. The police need to get better intelligence," Robinson said at the time.

But faced with recent scenarios, including gangsters committing murders with high-powered weapons in the proximity of the Sangster International Airport, brazen killers committing

murders on the 'elegant corridor' of Rose Hall, and downtown Montego Bay eroding into a scary shooting gallery, even the sceptics agreed that enough was enough.

In welcoming the imposition of the zone of special operations in Mount Salem last year, businessman Godfrey Dyer, a former president of the Montego Bay Chamber of Commerce and Industry and a prominent hotelier, argued that tougher measures were needed to control the spiralling murders in the parish.

"I would prefer to see a limited state of emergency than seeing 15 people being killed in one week," Dyer told a Gleaner Editors' Forum in late 2016.

"I think because of the last one we had in 2010, everybody thinks (that) with a state of emergency, the same will occur, and that is not necessarily so. We have had many states of emergency without any major alarm," argued Dyer at the time.

In 2006, when the illicit lottery scam first came to the fore in Granville, former Assistant Commissioner of Police Denver Frater warned that the face of criminality in the parish could change for the worse if the 'scammers' were allowed to become entrenched, given the fact that they had the resources to buy both weapons and influence.

"This new and empowered breed of criminals are a real challenge to the police because they have high-powered weapons and they are mobile," warned Frater.

"Because of the influence they have on some communities, it is difficult to get information on them ... if we don't find a way to stop them now, they will become a significant threat in the future," he added.

With the scammers merging into criminal gangs over time, first to secure underworld protection and later in a bid to control turf, they have now evolved into the dangerous criminals Frater warned about.

Their ruthlessness has made the former St James gangster look like a Sunday school teacher.

In addition, with the proceeds from lottery scamming and other illicit activities putting vast resources at their disposal, many of the scammers/gangsters have become quite influential in their communities, replacing the elected officials as the providers of resources.

"In the division I used to represent, criminals are the main breadwinner in many families, so they are well loved," a former parish councillor told The Gleaner.

"It is going to require some serious social intervention to change the mindset of these people because they have accepted crime as a way of life."

The news that two of the suspected killers apprehended on the first day of the state of public emergency last Thursday were only 15 years old did not come as a surprise to many persons, including a teacher at a prominent high school in the parish who believes that youngsters are seeking to mirror the hard-core gangsters.

"Many students are idolising gangsters. They are even calling themselves 'killi killi', and strangely, they are among the more popular students," said the teacher.

With a new generation of youngsters schooled in 'gangsterism' waiting in the wings for their turn to swim or sink in the ugly criminal underworld, many persons in Montego Bay, including the current president of the MBCCI, T'Shura Gibbs, are hoping that the state of emergency will yield the desired result.

"I am hoping that a lot of guns will be found and those responsible brought before the courts and convicted. Even if there are losses or damage to product in the short term, I hope that we will learn from the experience and put things in place to ensure long-term gains," said Gibbs.