Munroe backs state of emergency but urges ... 'Remember the lessons of 2010' 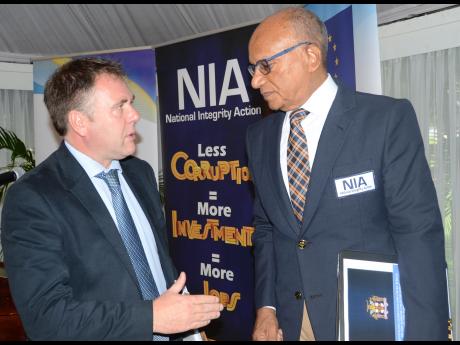 Kenyon Hemans
Gavin Tench (left), political counsellor and head of the Press and Public Information Team at the Europen Union's mission in Jamaica, with Professor Trevour Munroe, executive director of the NIA, at a trainihng conference in St Andrew yesterday.

Executive director of National Integrity Action (NIA) Professor Trevor Munroe is urging the security forces to learn from the lessons of 2010 as they carry out the state of emergency in St James.

Munroe yesterday declared NIA's support for the decision to impose the state of public emergency but added a caveat.

"Our hope and expectation is that resulting from this initiative and accompanying interventions, far fewer Jamaicans in 2018 will be deprived of the fundamental right to life by murderers and violence producers than the 1,600-plus across the country and the 335 in St James (least year)," said Munroe during a training seminar with members of the police force at the Terra Nova All Suite Hotel in St Andrew yesterday.

"We hope that the lessons learnt from the 2010 emergency operations in Kingston and St Andrew shall be recalled and applied," added Munroe.

A limited state of emergency was declared for Kingston and St Andrew on May 23, 2010, due to instability created in Tivoli Gardens and surrounding communities following efforts by the security forces to apprehend Christopher 'Dudus' Coke.

More than 70 civilians and four members of the security forces were killed during the period, with a subsequent commission of enquiry finding that some of the killings were extrajudicial and the rights of several residents trampled on.

"First and foremost, that (2010) emergency operation had the effect of reducing all serious crime, not just murder, across all of Jamaica for four years, interrupting a steady upward trend characterising previous decades. Correspondingly, that state of emergency ... produced an increase in confidence in the police and other governance institutions," said Munroe as he reiterated his appeal that some lessons must not be forgotten.

"The lesson must also be learnt that the 2010 state of public emergency failed to sustain the downturn in criminal violence beyond four years because of contamination of its legitimacy by abuse of police power and our incapacity to successfully investigate, convict, and incarcerate the violence producers subsequent on their detention," said Munroe.