'We need your help' - Security forces appeal to residents for info 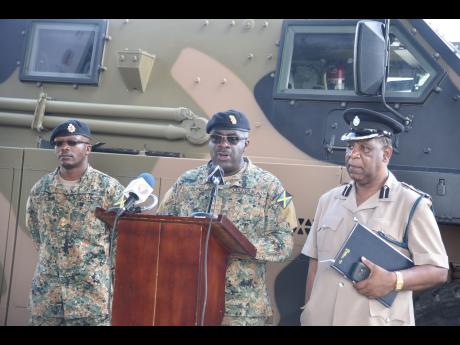 While claiming a successful first two days of operations since St James was placed under a state of emergency, the security forces are appealing for greater support in order to restore normalcy to the parish.

"After the first 48 hours of the announcement of the state of emergency, we have seen encouraging results, (but) our operations are only as good as the intelligence that drives them, and that good intelligence is already out there in the communities," said Colonel Daniel Pryce, officer with oversight responsibility for operations in the Jamaica Defence Force (JDF).

"We urge persons to use the JDF tip Hotline 837-8888 to call and tell us what you know about criminal activities."

Pryce was speaking at a press briefing along with members of the police top brass at the JDF Burke Barracks base in Montego Bay, yesterday.

Among the successes he listed over the last 48 hours was the arrest of eight alleged members of the Uptown Sparta gang from Flankers who were wanted for murder and other crimes. At least one high-powered weapon has also been seized and seven men arrested during the bust of an illegal petroleum operation.

Pryce did not allow any questions from journalists during the short briefing, the first in St James since the state of emergency was declared.

Glenford Smith | A resume for each job
Punish Petrojam wrongdoers – Munroe
JPS ready board gives us legitimacy say Majesty Gardens residents
A Matter of Land | How do I obtain a title for the land my father left me?
I am ready to lead Jamaica – Phillips