'Yes-men and lackeys!' - Knight says some lack guts to tell PM he is wrong in acting chief justice saga 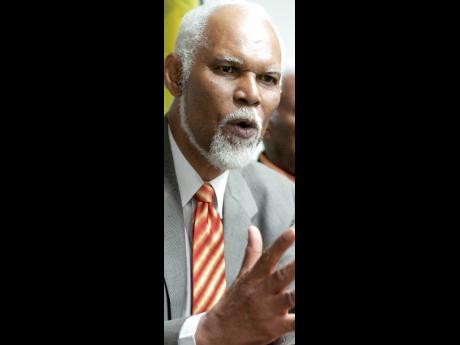 Senior Opposition lawmaker Senator K.D. Knight has suggested that those close to Prime Minister Andrew Holness who do not have the fortitude to tell him he is wrong in the controversial decision to appoint Bryan Sykes as acting chief justice are "yes-men and lackeys".

Addressing the hot-button issue during his contribution to the State of the Nation Debate in the Upper House yesterday, Knight said Holness had nothing to lose by appointing Sykes as chief justice.

"You do not want to appear to be that prime minister who is interfering in the operations of the judiciary, which must remain independent if

our democracy is not to crumble," Knight cautioned.

Holness has been inundated by criticisms for appointing the jurist to act instead of a permanent post, with some arguing that the prime minister's decision amounts to putting the judge on probation, which trespasses on the principle of separation of powers.

"Actions that bring results will determine the assumption of the role of chief justice," Holness had told the audience at Sykes' swearing-in.

However, Knight put this question to Holness: "What criteria have you put out there for the public to know that you will be using to judge the acting chief justice?"

"It creates uncertainty and we don't want to live in an atmosphere of uncertainty," he added.

Noting that the "country is unhappy with the acting appointment of Bryan Sykes as chief justice", Knight said that legal luminaries have already given their opinions on the issue.

"I am not rooting for anyone, but I am saying it is wrong constitutionally and wrong in principle to have a clear vacancy and appoint a puisne judge to act in that vacancy," Knight reasoned.

"So when they do something that your conscience and through your reasoning ability, you see that it is wrong, don't bother say, 'Oh, yes,' because you are on the same side wearing the same colour, ringing the same bell or blowing the same trumpet. You must speak honestly - there must be no uncertainty in the position you take.

The senior legal counsel argued that the chief justice was not the accounting officer and, therefore, the prime minister's remarks about taxpayers' money and accountability were misplaced.