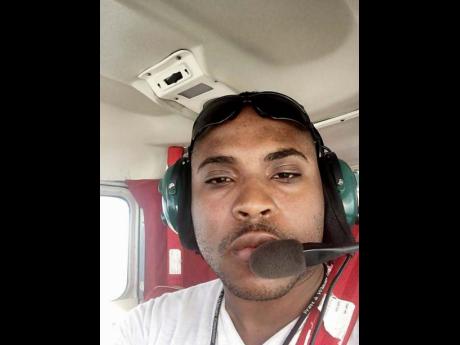 On May 11, Rojorn Campbell would have celebrated eight years since fulfilling his dream of becoming a pilot.

But as he took to the skies in a Cessna 206 aircraft on a fateful Thursday afternoon last week from Sangster International Airport in Montego Bay, St James, little did he know he would not make it to that milestone.

Instead, a tragic plane crash has plunged the local aviation fraternity into mourning yet again. This time, there is a grieving widow, who had no idea how quickly a 'happy ever after' could turn into such a terrible nightmare.

It all began some time after 4 p.m. when Campbell, fellow pilot Carlon Snipe, and mechanic Miguel Jones commenced what should have been a regular trip destined for the Tinson Pen Aerodrome in Kingston.

However, shortly after takeoff, panic buttons went off when the aircraft in which they were travelling went off the radar.

The Jamaica Defence Force was immediately called in to commence a desperate search for the men.

Despite their efforts, they stumbled upon nothing, and fellow pilots and industry workers started fearing the worst.

Three weeks before his death, Campbell had tied the knot with his longtime partner, Amoy.

And, it was at the wedding that he and his brother last shared a moment.

The Gleaner understands that Campbell also has a five-year-old daughter.

At the same time, family and friends are expressing shock at the passing of Snipe, who they describe as a "humble soul yet full of life".

In the aftermath of the tragedy, other local pilots poured out their emotions on social media as they were yet again mourning the loss of colleagues.

He said the regulatory body was probing the incident.

In 2016, a similar incident took place when a four-seat Cessna 172 Skyhawk aircraft crashed into a house in the Greenwich Town community in southwest St Andrew, killing three.