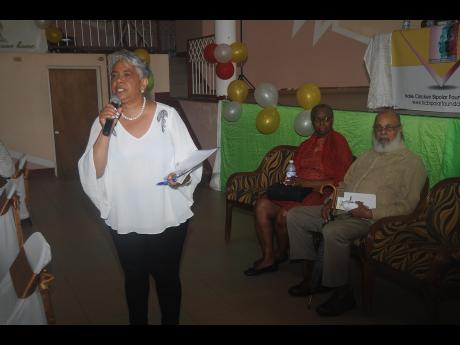 It was a case of tears and laughter at good memories at the Junction Guest House in St Elizabeth on Sunday, as the Haile Clacken Bipolar Foundation, created to immortalise the late Haile Clacken and draw attention to the mental illness of bipolar disorder, was launched on what would have been his 37th birthday.

Clacken, a graduate of York University in Canada, a former journalist at The Gleaner's Western Bureau in Montego Bay, and a teacher at Newell High School in

"Haile never allowed his illness to define him; he rose above it. So, today, I am rising," said his mother, who chairs the foundation, which has one branch in Jamaica and the other in the United States. "What I am doing is what Haile would want."

The launch ceremony, which had noted dub poet and radio personality Mutabaruka as the master of ceremonies, offered up a blend of art, culture, reflections and a phenomenal keynote address by Professor Fred Hickling, whose revolutionary approach to mental health at Bellevue Hospital in Kingston has sought to take the ugly stigma off mental illness in Jamaica.

In his presentation, Hickling gave insight into the history of mental illness in Jamaica, including the former practice of using the police to "catch" persons and take them to Bellevue. He explained how he used culture (poetry, music and drama) to help patients to demonstrate their worth to the surprise of 'normal' persons.

A film presentation cataloguing Haile Clacken's life, and his mother singing happy birthday to him, as if he was present, drew tears. The performances by dub poets Howard Hendricks, Ritchie Innocent and Yasus Afari drew rich applause as they infused eloquent social commentary to draw attention to issues such as social injustice, mental illness and the importance of good support structures.

Dr Doreth Garvey, who was Haile's personal doctor, explained the tell-tale signs of bipolar disorder and how to identify and treat it. Material on the subject was also distributed as a way of spreading knowledge of the disorder, which studies show is widespread in Jamaica.