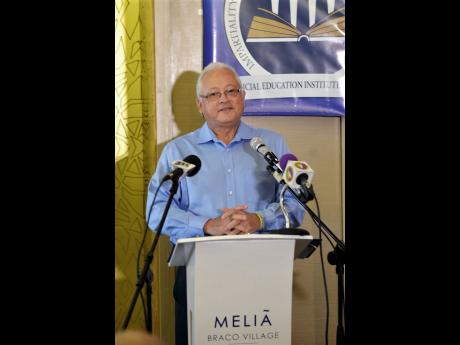 Justice Minister Delroy Chuck has expressed disappointment that the amended plea-bargaining system introduced last April in an effort to reduce the backlog of cases in Jamaica's courts has not achieved the success that he had envisioned.

Chuck voiced his frustration yesterday while addressing a judicial training seminar for case-flow management in Jamaica's courts at the Melia Braco Village resort in Trelawny.

"Last year, we enacted the plea-bargaining system, but I am very disappointed that it has not really taken off because the system was to ensure that we would get more guilty pleas. In all sincerity, we will never be able to get rid of the backlog if we have to try 90 per cent of the cases," Chuck told members of the judiciary at the training seminar.

"If we cannot get to less than 30 per cent of cases being tried, which means at least 70 per cent being dealt with by guilty pleas or plea bargaining, we are not going to succeed. When you look at the statistical reports, there are more cases coming in than are being disposed of.

"It means the backlog is increasing and efficiency of the court will be decreasing. It may well be that you need more courts, judges, personnel, and resources," added Chuck

Last year, the Plea Negotiations and Agreements Act of 2017 was passed by Parliament, providing a system where persons guilty of crimes can negotiate a plea deal that would result in a lighter sentence.

When the amended plea-bargaining legislation took effect, it was estimated that more than 35,000 cases were before the parish courts and there were more than 2,000 cases in the circuit courts.