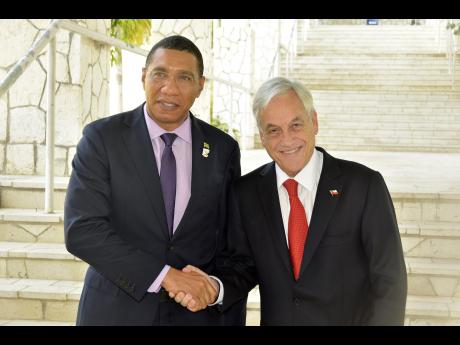 Prime Minister Andrew Holness and President of Chile Sebastian Pinera have agreed to have the two countries cooperate in a number of areas.

During bilateral talks on the fringe of the 39th CARICOM Head of Government Summit in Montego Bay, St James the two leaders discussed a range of issues such as trade and investment, language, health and sports.

During the talks Pinera and Holness also discussed the prospects of greater collaboration under the framework of a memorandum of understanding between the investment agencies of both countries, JAMPRO and ProChile.

According to Holness, the two agencies have developed a robust work plan to undertake promotional activities including business missions and forging linkages with chambers of commerce.

Both leaders also discussed the global challenge posed by non-communicable diseases and the implications they pose to society.

Holness told journalists that he was pleased to learn that Chile had developed a programme similar to Jamaica Moves, called The Choose to Live Healthy System, which encourages citizens to adopt healthy lifestyles.

Another area of interest explored by the two countries was sports with the signing of a declaration of intent to develop a programme of activities to be carried out next year, which would see the dispatch of coaches from Jamaica to Chile to conduct sport clinics in the area of track and field.

At the same time Chilean coaches would be sent to Jamaica to assist in the areas of gymnastics, field hockey and table tennis.

The declaration of intent was signed yesterday by Jamaica's state minister for foreign affairs Pearnel Charles Jr and Undersecretary for Foreign Affairs of Chile Alfonso Silva.