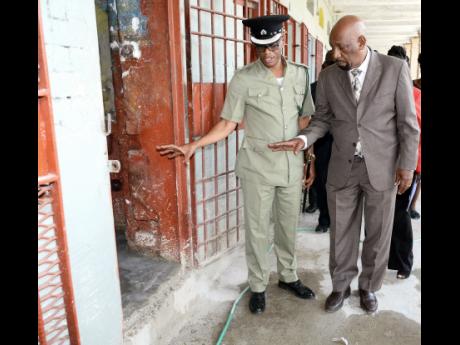 Kenyon Hemans
Supt Albert Brown (left) points to the poor state of the cells at the Tower Street Adult Correctional Centre in central Kingston during a tour by State Minister for National Security Rudyard Spencer on Monday, May 21. 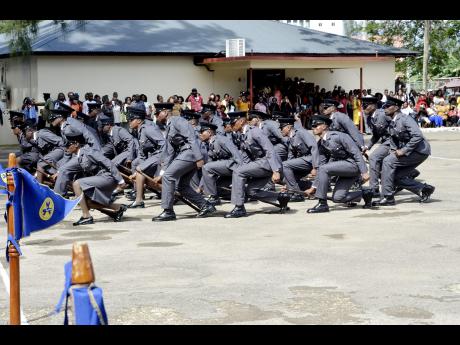 File
In this January 2018 photo, members of the 78th intake of correctional officers perform a drill during their passing-out parade.
1
2

The Department of Correctional Services (DCS) added 67 correctional officers to its ranks last year but still finished the year with 66 fewer officers as overworked and under-paid warders retired, resigned or died.

According to 2017 Economic and Social Survey of Jamaica (ESSJ) published recently by the Planning Institute of Jamaica, the DCS closed last year with 2,140 correctional officers, or 272 fewer than the number of officers needed in the system.

The ESSJ also reported that there were only 153 probation officers in the correctional services, 11 fewer than the required number.

That came at a time when the adult population in the island's prisons and remand centres inched up by 47, with 1,117 persons taken into custody, with slightly fewer being released.

Last week, Arlington Turner, chairman of the Jamaica Federation of Corrections, told The Sunday Gleaner that a number of issues combined to demoralise the men and women who work inside the correctional system, and the number of persons leaving could continue to increase.

"The working conditions in our island's prisons are atrocious and most correctional officers are disgusted ... with how the relevant authorities treat the island's prison officers," said Turner.

He argued that the island's two major prisons are overcrowded, understaffed and dilapidated, causing warders to work in deplorable conditions.

"Nothing tangible has been done to address this issue even after many announcements by different national security ministers about building new prisons," added Turner, as he pointed out that the island's two maximum-security prisons were built in the 17th and 18th centuries and have outlived their purpose.

"The Jamaica Federation of Corrections contends that the present management of DCS has failed miserable and should be asked to resign. Today's staff is highly demotivated, overworked, underpaid, highly stressed, and are reaching a breaking point that can never be OK for such a sensitive job," said Turner.

According to Turner, many correctional officers work long hours and are given days off instead of overtime payment.

He charged that some correctional officers retire with hundreds of days in lieu of payment while new recruits quickly resign to take up opportunities within the Jamaica Constabulary Force.

But director of communication at the DCS, Dexter Thompson, said the department has been putting measures in place to deal with the manpower shortages.

"Where we have shortfalls we sometimes use security guards, and we also try to see how we can creatively schedule our officers. But based on the nature of the training that we do, it makes sense to wait and train in batches," said Thompson.

He said the agency has been processing about 150 new recruits.

"This will more than take care of those who leave us based on retirement, based on their desires to seek better opportunities, and those who died during the course of employment," said Thompson, who declined to respond to Turner's allegations.

At the end of the year, the total adult custodial population in the care of the DCS was 3,657 and included 873 persons being held on remand at the Horizon Adult Remand Centre.

The ESSJ reported that Tower Street Adult Correctional Centre continued to operate at 75.4 per cent above its maximum capacity, with 1, 491 persons.

The maximum capacity at the Tower Street facility, better known as General Penitentiary, is 750.

Thirty-four foreigners were among those sent to Jamaican prisons last year.

Female inmates moved from Fort Augusto to South Camp
Department of Correctional Services to get more vehicles
Warders at risk - Correctional officers comfortable in prisons, fearful on the outside
‘Repositioning for excellence’