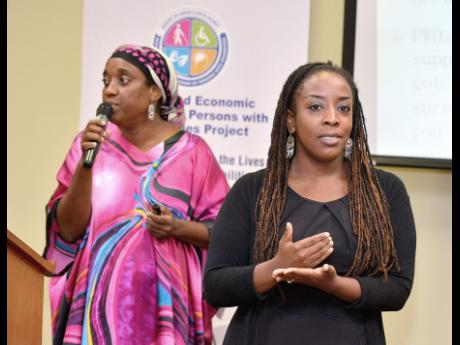 Kenyon Hemans
Stephanie Groves (right), an expert in sign language, demonstrates the proper way to sign at the Workability Function held at the UWI Regional Headquarters in Mona, St Andrew, yesterday. Also in the picure is Dr Joy Moncrieffe. 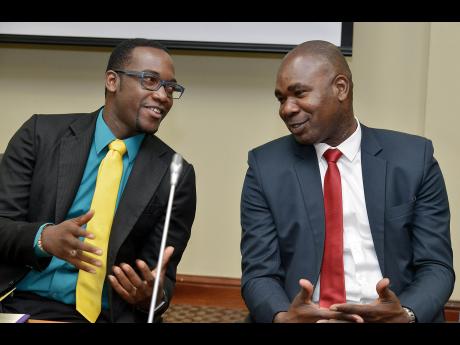 A little over 15 per cent of persons with disabilities (PwDs) who graduated from a four-year skills-training programme under the Social and Economic Inclusion of Persons with Disabilities project, which was spearheaded by the Ministry of Labour and Social Security, have been gainfully employed since completing the course.

Marks Willis was addressing the project's second consultation held at the Regional Headquarters of The University of the West Indies in Mona, St Andrew, yesterday. The consultation was geared at raising awareness of the issues related to PwDs making a way for themselves in the Jamaican workforce.

According to the Ministry of Labour and Social Security, 85 per cent of PwDs are not employed, and the disabled community accounts for approximately 10 per cent of Jamaica's population, which stands at roughly 2.8 million.

During the session, stigma and discrimination were cited as underlying issues still affecting PwDs.

"This Government maintains a resolute commitment to remove barriers that prevent the disabled from participating, while at the same time enabling them to unlock their vast potential. We are committed to the provision of access to services, intervention, and other opportunities aimed at improving the participation of persons with disabilities ... ," said Zavia Mayne, minister of state in the Ministry of Labour and Social Security.

Mayne also stated that the implementation of the Disabilities Act, passed in 2014, was a "high priority" for the Government. The law aims to foster socio-economic inclusion of members of the disabled community by safeguarding their human rights. The project is funded by the Japan Policy Human Resources Development Grant, with the World Bank as the implementing agency.