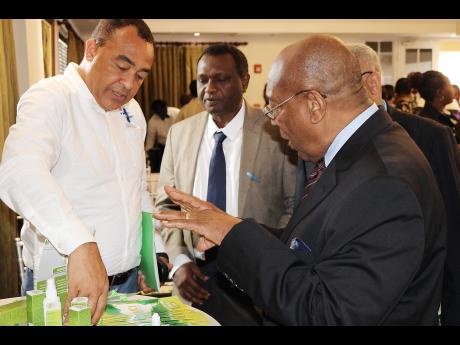 Minister of Health Dr Christopher Tufton made it clear yesterday that Jamaica's efforts to tap into the multibillion-dollar global medicinal marijuana industry would continue to be guided by public health concerns taking precedence over potentially lucrative economic returns.

"As the chief guardian of public health, I am paid to be cautious around new discoveries and inventions ... . Financial risks may cost you money, but public health risks can cost you lives. When we chart courses and explore new frontiers as scientists, it is always important for us to be driven by the science and data," Tufton said during the official launch of Medicanja's range of therapeutic products.

After viewing a video presentation with Professor Henry Lowe, founder and executive chairman of Medicanja, narrating its goal of "innovation for wealth creation using our indigenous resources, particularly our medicinal plants", the health minister put into perspective his ministry's cautious approach.

"We see the benefits for medicinal marijuana, and I know that we are seen as probably the obstacle to advancing the industry, [but] we can't be irresponsible in terms of our approach," stated Tufton. "We have to take a public-health approach, which is more cautious than a commercial, financial approach. But in public health, we have seen enough to be convinced that there is significant potential in the medicinal marijuana space," he added.

Tufton commended Lowe and his team for their commitment to the "advancement of an industry that even though it has been around for a long time, still has to be considered in its infant stage - the medicinal side".

Tufton used the occasion to reiterate the health ministry's stance on the recreational use of marijuana: "Let me be very clear. We don't support smoking. I would be an outright liar to go anywhere and give the impression that I support smoking, and so, clearly, that debate has to be held and some decisions taken along those lines."

Meanwhile, Lowe told his audience at Eden Gardens in New Kingston that the launch of the 12 therapeutic products could also usher in a new chapter of regional cooperation.

"This will be done through the provision of education and training, know-how and variety of technical services to enable the public and private sector in the CARICOM region to understand, grow and utilise medical cannabis for their therapeutic and commercial purposes," the scientist stated.