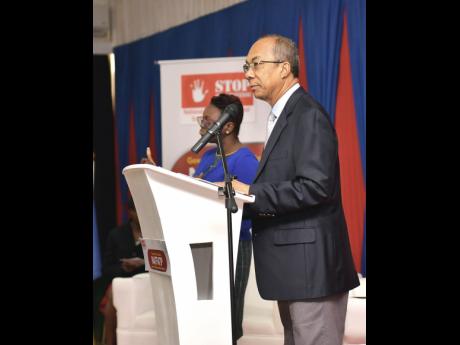 Yhomo Hutchinson
National Security Minister Dr Horace Chang addressing the opening ceremony of the National Task Force Against Human Trafficking in Persons International Human Trafficking Conference at the Melia Braco Hotel in Trelawny on Wednesday, July 25. The two-day conference was held under the theme ‘From Victim to Survivor: The Hard Road to Recovery’. 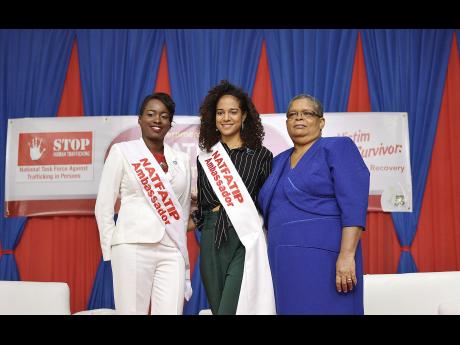 Yhomo Hutchinson
Permanent Secretary in the Ministry of Justice and Chair of the National Task Force Against Trafficking in Persons (NATFATIP) Carol Palmer (right) shares a moment with founder of The SunGate Foundation and human trafficking survivor Shamere McKenzie (left) and Miss Jamaica World 2017, Solange Sinclair, at the NATFATIP International Human Trafficking Conference, which opened on Wednesday , July 25, at the Meliá Braco Hotel in Trelawny. McKenzie and Sinclair were sashed as Jamaica’s first human-trafficking ambassadors. 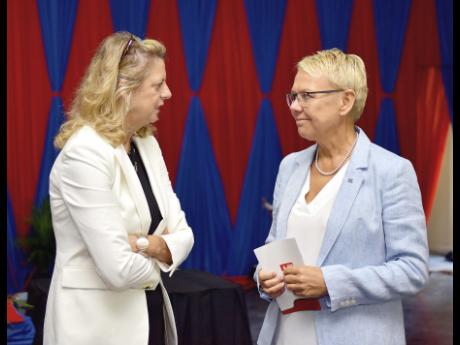 Yhomo Hutchinson
High Commissioner of Canada to Jamaica Laurie Peters (left) is in conversation with Head of the European Union Delegation Malgorzata Wasilewska at the opening session of the two-day National Task Force Against Trafficking in Persons International Human Trafficking Conference.
1
2
3

As the 2018 Atlantic Hurricane season continues, Dr Leith Dunn, a sociologist and gender specialist at the University of the West Indies, Mona, is warning that such weather systems and other natural disasters may put Caribbean countries at greater risk for human trafficking.

Dunn sounded the warning while addressing the National Task Force Against Trafficking in Persons' human trafficking international conference, which concluded at the Melia Braco Resort in Trelawny on Thursday.

The two-day conference, which was the first of its kind in the Caribbean, involved dignitaries from various countries discussing possible solutions to the human trafficking issue.

"Whenever there is a natural disaster, there is increased vulnerability for human trafficking," said Dunn. "For example, you have a tsunami in which a child's parents are killed and her family home is destroyed. She is adopted by someone who promises to take care of her, and then she is trafficked."

Dunn continued: "We need, as small island developing states, to take account of the fact that human trafficking is an increased risk when we have our hurricanes. Last year, we had several countries being adversely affected, and even before they could recover, there were other hurricanes. We need to be making partnerships between disaster preparedness and response and anti-human trafficking."

Dunn was referencing last year's hurricane season when the Leeward Islands were devastated by Category Five hurricanes Irma and Maria.

According to the 2016 Global Report on Trafficking in Persons from the United Nations Office on Drugs and Crime, natural disasters are among the reasons why many people migrate to other countries in search of a better life.

The report noted that in such cases, migrants may become victims of cross-border trafficking, constituting 60 per cent of all detected victims.