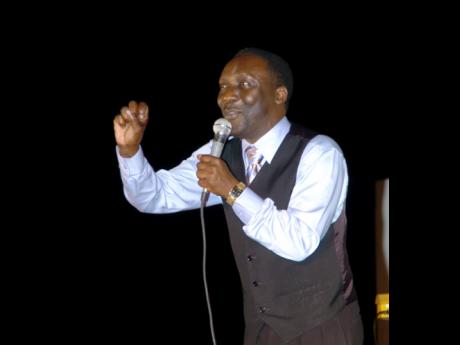 Actor, writer and teacher Owen 'Blacka' Ellis is insisting that intelligent Jamaicans take their rightful place in the country and not allow ignorance and people with narrow views to take the lead.

According to Ellis, some of the ideas now creeping into Jamaica are not uplifting the society as they make a mockery of legitimate speech, customs, and norms.

"Intelligent people are the majority, so I wonder how the ignorant get all the visibility. I worry about the idea that ignorance increases because the intelligent don't insist.

"We who know better have to insist. I enter a restaurant and I say I want to eat so and so, and a man is going to say, 'Yow, you can't say 'eat,'" charged Ellis while delivering the keynote address at the Peace and Love Academic Scholarship (PALAS) Awards at The Jamaica Pegasus hotel in New Kingston on Saturday.

He singled out young men in particular as those who have become increasingly attached to these narrow ideas.

"We have allowed some ignorant fools to change how we talk. Young men stop saying 'number two'. Nobody on a football team can't wear two because some deejays tell dem seh bad man don't play number two," said Ellis as he illustrated how the ignorant are impacting speech in Jamaica.

He pointed to how fathers view their relationship with their children.

"Have, to me, denotes ownership of, association with, connection with. 'Man don't have, man get' is a very dangerous trend because it suggests that you have no part to play in it. You sit down quietly, mind your business, and some woman pass by and let go a barrage of pickney pon you," said Ellis.

He added: "The same man who says he doesn't have pickney will say him have a bike or a car."

Ellis, one of Jamaica's foremost comedians, was among the highlights of the function, where PALAS continued the eight-year-old tradition that has seen it issuing some 600 scholarships valuing more than $40 million.

The non-governmental organisation also gives computers and other aid to young people from Jamaica and the wider Caribbean attending school in the United States.

PALAS, led by its founder Ruel 'Rula' Brown, had set its sights on delivering 105 scholarships for the 2018/19 period.