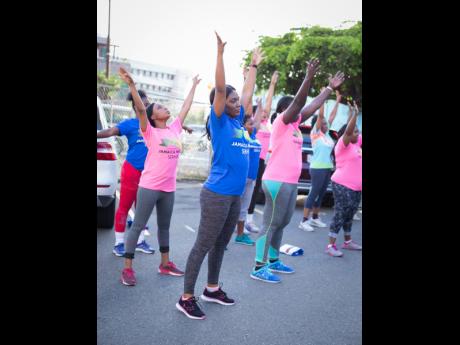 Contributed
Employees at the Ministry of Health on World Move For Health Day in 2017. 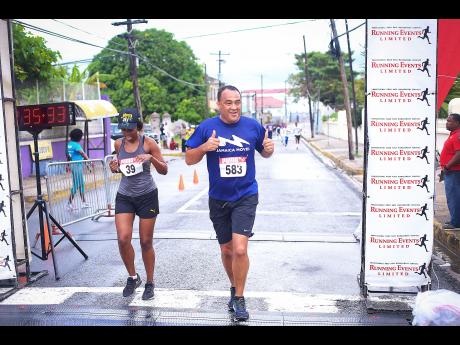 Despite an extensive national crusade to get Jamaicans moving, the latest national health and lifestyle survey has shown that 52 per cent of Jamaicans made no attempt to increase their physical activity last year, and for most of those who work, the general feeling is that their job is exercise enough.

According to the Jamaica Health and Lifestyle Survey 2018, younger persons living in urban communities are more likely to attempt to do more exercise. The study found that 82 per cent of Jamaicans were engaged in low physical activity, 16 per cent engaged in moderate activity, and two per cent in high-level activity.

"Although regular exercise was considered important, participants believed that the physical demands of their job were sufficient to constitute exercise," the researchers found.

Another of the findings from the survey was that while participants demonstrated awareness of appropriate health behaviour, their awareness did not always translate into healthy choices and behaviour.

"Participants were affected by stress, financial constraints and inaccessibility of healthy options, and they believed that this in turn reduced their capacity for healthy behaviours," the researchers noted.

A LOT MORE WORK TO BE DONE

Health Minister Dr Christopher Tufton, who launched the Jamaica Moves campaign more than a year ago, is not daunted by the fact that more than half of the population have not made any effort to get active despite the millions spent to show them how to fit exercise into their daily schedules.

"Well, it certainly means that 48 per cent have, which is encouraging, but we need more, we have a lot more work to do," Tufton told The Sunday Gleaner.

The campaign has seen the minister and health and fitness experts travelling the island to teach people how to exercise, and to educate Jamaicans about proper nutrition and the tenets of living a healthy life.

"It means that the process of behavioural change is difficult, it is not a one-year event. It is not an overnight event. It is really changing people's lifestyle. We have to commit ourselves to making healthier decisions on a daily basis as a routine, rather than an exception, so it is not an event, it is a process," said Tufton.

"What the health and lifestyle survey shows is that while approximately half the population is making an attempt, the other half isn't, and this justifies us continuing the programmes to sensitise and motivate," added Tufton.

Fitness expert Stokey Rose finds that people have varying reasons for not being active despite the promulgation of messages to encourage a healthy lifestyle.

Rose noted that there are some people who argue that they simply do not have the time because of their obligations.

"I do come across these persons, especially females, who have a greater responsibility at home, and especially those who are in the rural areas, because those persons sometimes have less access to gyms or recreational places and they have to more than likely tend to their children at home," said Rose.

"They want to, but they can't exercise, because you know the mother has obligations like homework and food to cook. The men are more active because they are more socially driven to play football and do other activities that are considered to be exercise," the fitness expert explained.

According to the national survey, one in two Jamaicans (54 per cent) was classified as overweight.

This means that they are either pre-obese or obese. Women were more affected by pre-obesity and obesity, with two-thirds of Jamaican women 15 years or older falling in this category.

Rose, who is a personal trainer at TrainFit Club and was among those who helped to champion the Jamaica Moves campaign in the initial phases, believes the effort is helping to galvanise people to lead a healthier life.

He is adamant that there is the need to continue to preach the message and allow people to accept it in their own time and space.