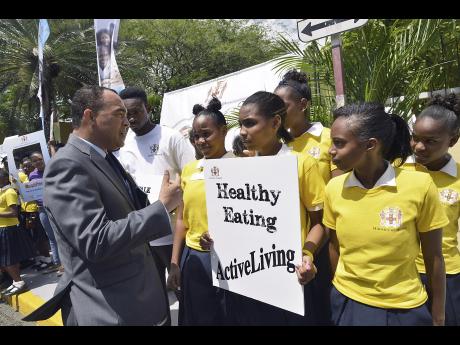 Highlighting a Jamaica health and lifestyle survey, which indicates that nearly half of Jamaicans are classified as having low levels of physical activity, Health Minister Dr Christopher Tufton has suggested that this inactivity has led to an epidemic of obesity, and as such, he has launched the 'Jamaica Moves' national campaign to spur Jamaicans to become active.

The Jamaica Moves (#JaMoves) national campaign, according to Tufton, will be an intense call to action for Jamaicans to become more active. He said the

campaign would promote, educate, and develop programmes to get Jamaicans moving both through traditional and non-traditional media.

"This initiative will focus on community-level interventions to facilitate increased physical activity among the population. As part of this drive, we will be developing walking trails in each parish and organising and piggybacking on walking and running groups to increase social support and motivation for physical activity."

Tufton said his ministry would also implement several other initiatives around Jamaica Moves as well as a media campaign to support the activities. "We also intend to collaborate with other private- and public-sector entities such as the Ministry of Education and community-based organizations to transmit the message that an increase in physical activity reduces the risk of illness and supports the general well-being of all citizens."

On the question of nutrition, the health minister raised concerns about the findings of the latest health and lifestyle survey, which indicates that three-quarters, or more, of Jamaicans aged 15-74 consumed one or more bottles of a sweetened beverage per day, with rural dwellers consuming more than urban dwellers.

The survey also indicates that 99 per cent of Jamaicans are currently consuming below the daily recommended portions of vegetables. Additionally, the health minister said the consumption pattern for fruits was similar to vegetables, with less than two per cent of individuals meeting the recommended daily intake.

He said the Government would be promoting the Food-Based Dietary Guidelines in a more assertive way in the months and years to come. "This is a set of nutrition and health-related recommendations meticulously crafted and carefully designed specifically for Jamaicans. It was developed in an effort to provide nutrition and health-related recommendations to promote healthy eating and lifestyle habits among the population. It focuses on foods indigenous to Jamaica, portion sizes, food groups, and eating patterns that will provide the required nutrients to promote health and prevent chronic diseases."