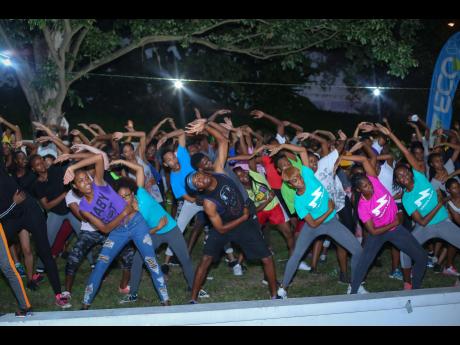 Contributed
Students at the University of the West Indies, Mona, at the launch of the Jamaica Moves Campaign earlier this year.

Indicating that it was too early to determine the success of the popular Jamaica Moves Campaign, Health Minister Dr Christopher Tufton believes the message has reached most if not all Jamaicans.

The ministry has been taking the message of the importance of physical activity around the island, through its Jamaica Moves Campaign, in a bid to tackle non-communicable diseases.

Tufton told a press briefing yesterday at the ministry's offices in New Kingston that he wants to move beyond the message to seeing tangible evidence of behaviour change.

"Whether or not the Jamaica Moves is a success, it is too early to determine that, frankly speaking. You start a concept of prevention around critical components - good health and wellness, knowing your health status, diet and exercise. It's about behavioural change and a year or a year and a half is just too early to determine whether you can change behaviour," Tufton said.

"It is something you have to assess over time, however what we have been successful at doing is to create reach, in terms of the message, in that most Jamaicans are very aware that health and wellness are linked to physical inactivity, poor diet and the fact that you don't know your health status. That has been the sort of central message that we are trying to get across," he continued.

He also addressed the issue of a lack of physical space for exercise but noted that the reasons for that go beyond a health problem.