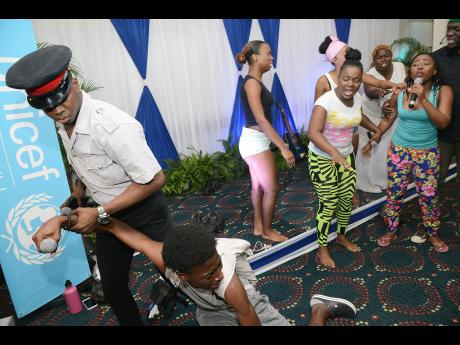 Rudolph Brown
Members of the ASHE perform at the 'Talk De Tings: Students Speak Up about Violence in Schools' at The Jamaica Pegasus hotel in New Kingston last Tuesday. 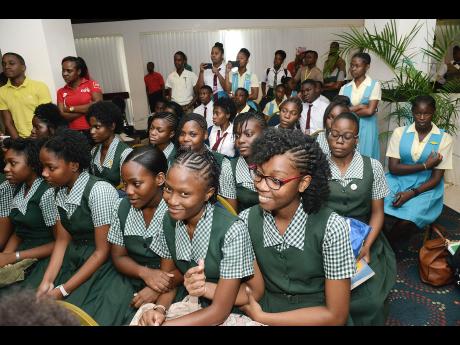 Rudolph Brown
Some of the students who took part in the UNICEF Jamaica in collaboration with the ASHE Company 'Talk De Tings: Students Speak Up about Violence in Schools' at The Jamaica Pegasus Hotel last Tuesday.
1
2

Abigail Sinclair* was only 13 years old the first time she stared down the barrel of a gun, and if that experience wasn't traumatic enough, she had a similar encounter a year later.

The teenager was home with her family in their St Ann community when a group of men broke in and held them up with guns. She watched as they gun-butted her stepfather until he bled and roughed up her mother. One then turned the gun on her and asked how old she was.

"It was the first time I had a gun pointed at me. I was getting so afraid that I couldn't speak because I was afraid that maybe their hand would pull the trigger, and that would be the last of me, so I began to pray, and I began to trust God that He would pull me through in that situation," Abigail told The Sunday Gleaner.

The men relieved her family of cash and a car that night, and for a long time after, everyone was on edge including her.

"It impacted me so badly. It's like every teacher told me that my attitude was changing, and I was dropping back, but I didn't really tell them why.

"My mother didn't want me to go anywhere, like, to visit any family, because she was scared and she wanted me by her side," shared Abigail.

Just as her family was beginning to pick up the pieces, the gunmen struck again a few days before Christmas. Her mother has since installed an alarm system at their house, hoping that it will ward off a third robbery attempt. But while the teenager feels more secure, this security measure has created other issues.

"It goes off sometimes, and you hear the noise and it wakes you up, so it's kind of hard. When I go to school, the first class is not really bad, but when it comes to the second and third class, I want to sleep," she said.

Abigail was among several students in attendance at a 'Youth Talk' event hosted by UNICEF in collaboration with the Ashe Company at The Jamaica Pegasus hotel in New Kingston on International Children's Day last Wednesday.

Among a roomful of more than 120 students from schools across the island, Abigail did not have any distinguishing features that would indicate that she had been a victim of crime and violence, but neither did the three other students who shared their stories with The Sunday Gleaner.

All had faced the gun at one point in their life.

St Jago High School student Rodje Blake* was 14 years old when two men broke into the house he and his aunt share in a middle-income gated scheme in St Catherine. The men pointed guns at them before searching their house.

"I was shocked because I was wondering how they came in. One of them was talking to me a way, and I kind of reacted, and he released the safety off the gun, but my auntie was telling him to calm down," Rodje recounted.

His life was spared, but the youngster learnt a lesson that night that he feels will remain with him for a lifetime. "The world is a very cruel place."

Sixteen-year-old Trevor Campbell* knows just how cruel the world is as for several nights, he has had to hide under his bed while warring factions in his western St Andrew community trade bullets.

There are several things that go through his mind as he tries to safeguard himself and his younger sister under the bed, but the thing that features most prominently in his thoughts is the safety of his parents.

"My mother and father come in late, so most times, I am worrying about them and wondering if anything a go really happen to them," said Trevor, who admitted that he has also been a perpetrator of violence.

"One time I used to really follow badness. Mi used to never really go school, and me smoke weed, but then I noticed that when you do those things and idle out your time, when you get older and your parents kick you out, that not going to really help you," declared Trevor.

Earlier this year, he spent three days in lock-up after the police found him in the company of another teenager who had a gun. Trevor didn't think twice when his friend came to him with the gun and told him that he was going for the youth who "dissed" his little cousin.

"You just don't want to be the one that is left out. Most times, you are in the house and there is nothing to do and your parents are not home a lot, and you don't really get much attention," he said.

That was not the first time Trevor was getting into trouble as he admitted that he had been involved in several fights at school.

"I was in class one day and a boy came and just started to chuck me, literally. I hid a knife in the bathroom at school the day before, so I went in there for it and came back out and said, 'If you trouble me again, I am going to stab you and kill you'. He thought it was a joke, and so I dipped into my waist for the knife and swing at him, but my friends hold mi back," recounted the lanky lad.

According to UNICEF'S U-report, 74 per cent of more than 3,000 Jamaican students who were polled in September said they are worried about violence in or around their school.

The firebombing of several houses in his community has made the news in recent times, and he witnessed the shooting of a man who called for peace.

In recent days, he has seen more security patrols in his community, which he welcomes with some reservations.

"The system too corrupt miss, because some of the police are on the bad man side," said a resigned Patrick.

*Names changed to protect the identities of the children.