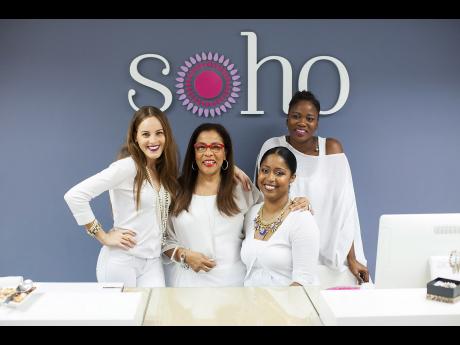 This is the seventh year that SoHo boutique has been on a massive drive to gather female clothing for their annual Christmas Closet, and chief executive officer Michele Coulton, along with her team, never gets tired of spreading the love.

In the spirit of the season, SoHo is encouraging its clients and members of the public to donate new or gently used clothing, which will go to the Homestead Place of Safety.

Coulton emphasised the company's motto, 'It Doesn't Cost to Care', as she appealed to citizens to make an effort to give of their time and resources.

"We take so many things for granted. We believe that somebody else wouldn't appreciate some of the things we believe are insignificant, but the girls are in need, and we are making a small contribution to a large need out there," she said.

Coulton said that what propels their drive to ensure that they make their contributions annually is the continual feedback they have got over the years about the difference the donations make.

"The reviews that we get make you realise that it is a big deal when they get these articles of clothing. As a boutique, where we are in the business of clothing and women, it was a no-brainer to us in terms of making an impact this way," she said.

"You are talking about a girl in a home who may not have a blouse, or she has been wearing the same blouse for the last three to six months. Some of us have various things that we can change around and put on our bodies daily, so we forget how difficult it is for someone who doesn't have it. So if we can bring a little bit of cheer to these young women, that's the least we can do."

The clothing drive starts today and runs until the end of January 2019.