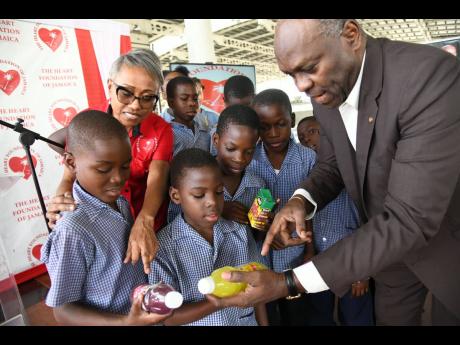 Rudolph Brown/Photographer
Fitzroy Henry, professor of public health nutrition at the University of Technology (UTech), and consultant cardiologist Dr Andrene Chung, chairman of the Heart Foundation of Jamaica (HFJ), chat with students from Seaward Drive Primary School about sugary drinks as the Heart Foundation of Jamaica launches Phase 4 of the ‘Are We Drinking Ourselves Sick?’ campaign at the Half-Way Tree Transport Centre yesterday.

The Government should move post-haste to levy a tax of at least 20 per cent on sugar-sweetened beverages (SSBs) as a disincentive to consumption and pump the revenues into programmes focused on health promotion and obesity prevention, professor of public health nutrition Fitzroy Henry has suggested.

Henry, in delivering the keynote address as the Heart Foundation of Jamaica launched Phase 4 of its ‘Are We Drinking Ourselves Sick?’ campaign yesterday, argued that such a move was in the best interest of safeguarding the health of the citizenry, reiterating that consumption of SSBs is a major contributor to obesity and non-communicable diseases.

“We have to protect particularly our children, and the message, really, is for us to do whatever is necessary,” Henry said.

“Whether it is improved labelling, more education, more advocacy, reformulation of products, or whether it is marketing – working with the television, radio, and social media – so that people can understand more about the dangers of sugar, we have no choice but to protect the public.

“And we have to do a number of things – not just taxation alone – but taxation, to my mind, should be the centre of the entire approach to protect the public against obesity and these chronic diseases.”

Henry argued that 38 countries have already introduced taxes on SSBs while another 15 are looking to do the same by next year.

Henry underscored that there is clear evidence that taxation of sugary beverages has led to reduced consumption of SSBs and increased consumption of healthier alternatives globally and in the Caribbean.