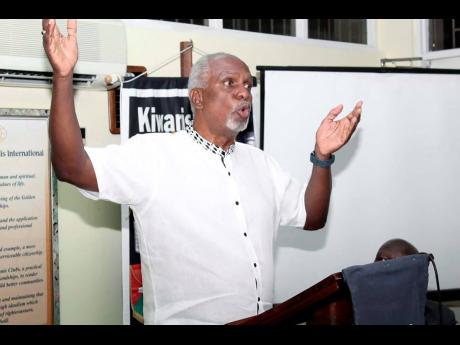 Jamaican construction firms are prejudicially labelled as corrupt and inept when their projects are hit by cost overruns and delays, but government and other stakeholders give foreign contractors a free pass for failure, a construction expert has charged.

Speaking at a meeting of the Kiwanis Club of Barbican on Tuesday night, Michael Archer said that foreign firms do not face the same level of scrutiny in project implementation as Chinese firms, many of which have gobbled up government and private-sector contracts to build highways, bridges, and high-rises.

Referring to the recently completed widening of Marcus Garvey Drive in Kingston as an example, the project missed its deadline three times, said Archer, past president of the Incorporated Masterbuilders Association of Jamaica, an umbrella group of construction professionals.

“Do you know that the contract on Constant Spring Road won’t be meeting the time frame?” he questioned, in reference to the US$19 million widening and resurfacing of the upper St Andrew thoroughfare, one of three ‘Legacy Projects’ the Government hopes will increase productivity and decongest traffic flows.

“The North-South Highway was a good project for the Chinese in terms of cutting through that hill. Do you understand how many slope failures went on there? If it was a local contractor, there would be an investigation in Parliament!” he said, citing problems that have hit construction projects undertaken by China Harbour Engineering Company.

Archer decried that local players have been wearing the tag of corruption unfairly for too long. The scope of many projects has been changed to include major infrastructural adjustments,

“That brush has scarred the local industry in some respects. I have been involved in projects that have been escalated because the initial planning was short-sighted and there are clearly omissions that need to be added.

“The public sees that a job moves from $500 million to $700 million, they say somebody thief $200 million, not that they included traffic light, drainage, and some other things,” he argued.

He said that the blacklisting of local construction interests has triggered an exodus of some of Jamaica’s best technical talent.

“We have some of the best engineering capacity, but you have to go to Canada and South Africa [to find them]. They’re not staying here because we have no respect for technical professionals, and we consider people who make money as being crooked,” the former masterbuilders’ president lamented.