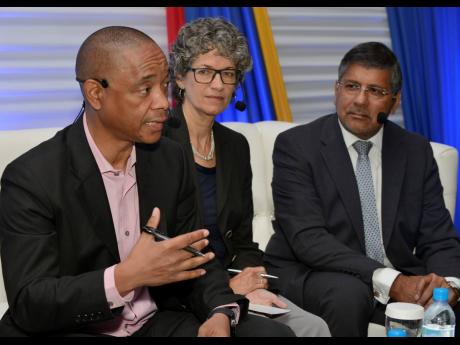 Successive governments have refused to divest Jamaica’s largest dump because the Riverton City site is located in the midst of mainly poor residents living on the margins and not the wealthier middle and upper classes, a noted environmentalist has charged.

Riverton, a hodgepodge of chemical, electronic, and other solid waste, is legendary for mismanagement, security breaches, and fires set by arsonists that cover Kingston and Portmore in smog and causing respiratory problems.

“Certain Jamaicans are easily sacrificed. They live in these sacrifice zones, and all I can ask you to do is imagine a garbage dump on Jack’s Hill or Cherry Gardens and imagine how long that would be tolerated,” stressed Diana McCaulay, founder and chairman of the Jamaica Environment Trust (JET).

“Even when these dumps are not burning in ways that make it into newspapers, there are small fires that burn all the time. Our air quality close to the dumps, particularly Riverton and Retirement in Montego Bay, is awful, and thousands of our citizens put up with that day and night.”

McCaulay was speaking yesterday at the Private Sector Organisation of Jamaica (PSOJ) first President’s Forum held under the theme ‘Waste Management: Dumping Jamaica’s Growth and Development’. The forum focused on the ongoing challenges related to improper waste-disposal practices, the far-reaching impact on the environment, public health, and overall development.

The divestment of the country’s dumps has been on the table since the early 2000s, and according to National Solid Waste Management Authority Chairman Dennis Chung, the only reason it has not happened is because the Government has not given the go-ahead.

“There are over 40 expressions of interest. One person wanted to invest US$1 billion in this thing. There was a divestment committee that was set up under the previous government. It went nowhere.

“There’s another that’s there, but I think they are taking too long. I think this is just a matter of looking at those over 40 expressions of interest we have and just to start some discussion and set a timeline for getting it done.

“It’s necessary because the truth is that unless we prioritise, the Government will not have the resources to do what needs to happen with the dumps … . I don’t see any reason why the privatisation process has not happened apart from just the execution from the policy perspective,” added Chung.