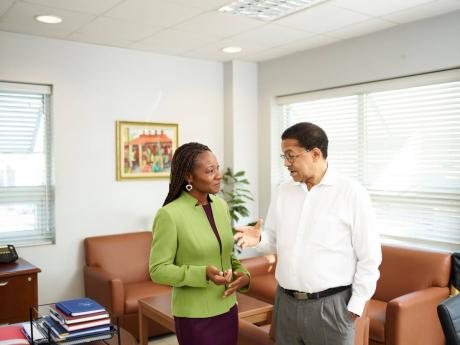 Valrie Campbell is small in stature and unassuming in her demeanour, but her exterior belies a woman who is blazing trails in the port terminal industry, wielding tremendous influence and earning the respect of her peers in a male-dominated industry.

Campbell is terminal manager at Kingston Wharves, the first woman to be appointed to that position in its 74-year history.

Kingston Wharves is the Caribbean’s leading multipurpose port operator and provider of logistics services. The business unit Campbell manages is the nerve centre of the organisation’s operations, earning more than 70 per cent of the $7.25 billion in revenues generated by the company in 2018.

Almost two decades ago, Campbell left the insurance industry to take up the position of receptionist within the organisation, humble beginnings of which she is proud to this day.

“I have a philosophy that any job that I do must be done to the highest standard. If I am the floor sweeper, then I am going to be the best floor sweeper anyone has ever seen,” said Campbell. “I resolved every day to approach that job with professionalism. After all, I was the voice and the face of the organisation.”

But back then, she recalls, “I did not have many female role models within the organisation.”

CEO of Kingston Wharves, Grantley Stephenson, observes that 16 years ago when he assumed leadership of the organisation, women were not to be found in senior levels of the company and there were very few in non-traditional functions. He is particularly pleased with the progress Valrie Campbell has made in her journey.

The holder of an MBA from Nova Southeastern University, the 18-year veteran is responsible for a team of more than 500 employees. “Some of them are older and more experienced in their areas of specialisation than I am,” she quipped.

“I believe in employing people who are competent in their field. I am not intimidated in any way by persons who are good at what they do. In fact, the more competent my team members are, the more value they add,” Campbell said.

The terminal manager admitted that she has evolved in her leadership style.

“Being autocratic is not always the best approach, and as a woman, you don’t have to act like a man or lose your femininity to earn the respect of men,” she said.

It is a view that is shared by Paula Edwards, who herself is in a non-traditional position as operations coordinator for stevedoring. She lauded Campbell as an effective communicator.

“She is not always seen, but she is always felt. We call her the boss of all bosses. She always bats for us to give us the tools we need to do the job. If she is unable to deliver on a promise, she has an honest conversation about it.”