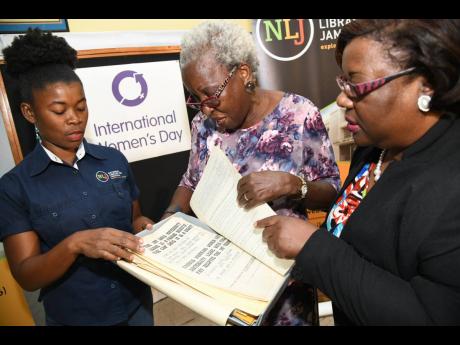 Forty years after the Maternity Leave Act was passed, those who helped to shepherd its passage are concerned that the surge in contract work is depriving scores of employed women of this benefit.

Among those who share this concern is Linnette Vassell, who was the coordinator of the Committee of Women for Progress (CWP), which helped to lobby for maternity rights in the late 1970s.

On Friday, members of the committee handed over letters, documents and newspaper clippings to the National Library of Jamaica documenting their campaign for the law, and while it was a joyful occasion, the gender advocate was deeply troubled.

“Our concern has to do with the fact that the labour market has changed in a way that makes contract labour very prolific. A lot of people are on short-term contracts; they will work for three months, six months, then they are rolled over, so they are not at the place long enough,” she said.

“Contract labour means that people’s continuous employment is jeopardised. A lot of people are on contract and, therefore, don’t accumulate the required time for them to qualify for maternity leave from that particular employment.”

The law requires you to be employed for one year with a company in order to benefit under the Maternity Leave Act. A woman is guaranteed two months with pay and one month without pay after having a baby.

“In a lot of these contracts, you are taken on, rotated and taken on again, so you are almost there full-time, but they [employees] break it because it suits them,” she said.

There have been several calls for an end to the practice of employing persons on short-term contract, but Labour Minister Shahine Robinson defended this practice last Tuesday, arguing that it was recognised by the International Labour Organization (ILO).

“We need to look at what contract work is doing to employment period, and women’s employment in relation to accessing benefits,” Vassell urged.

“The instability is awful,” she lamented.

Judith Wedderburn was part of the CWP, as the representative for the PNP’s Women Movement, during the intense fight to secure maternity rights for women. She recalls how women from the Church, and youth and women’s groups mobilised persons to support the call for maternity leave.

“We were able to draw in women from all strata, so it wasn’t just working-class women, and that was the power of it. That was how in the end we got the law, because it was a broad-based representation of women across classes who understood that it wasn’t about politics, it was about women’s right to the protection that a maternity leave law gives you,” she said.

“Remember, we didn’t have Internet access. It had to be face-to-face sitdown [and] talking to women to convince women that it is in their best interest to come out and support us. Talk to your husbands, talk to the men in your family, get them to support it, so that they see the benefits of it,” she said.

She, too, is concerned about the reluctance of some companies to grant women maternity leave.

“We know of women who get fired because the management learns that they are pregnant and they really don’t want to have to pay the maternity leave. But if the young woman knows her right, she will demand it. What she may not do is get her job back,” she said.