Senate is no place for corrupt individuals, says K.D. Knight 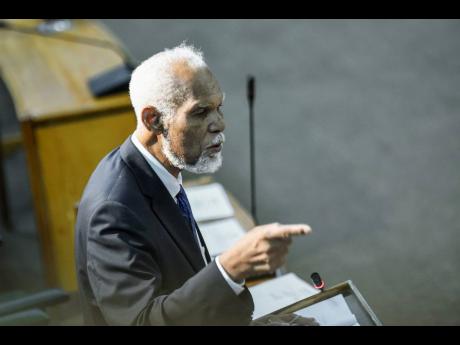 Opposition Senator K.D. Knight yesterday charged that the Upper House of Parliament was not the place for dishonourable politicians.

Making his contribution to debate on the Appropriations Bill in the Senate yesterday, Knight saluted his fellow People’s National Party former Senator Damion Crawford, saying that his party colleague acted honourably during his time in the Senate.

“I want to just say a couple of words in relation to Senator Damion Crawford who attended Kingston College, but in his tenure here in the Senate he, even more so, adopted the motto ‘Age Quod Agis’ – meaning whatever you do, do it well – and that is how Senator Crawford performed as he participated in debates in this honourable chamber,” said Knight.

He continued: “He was indeed an honourable senator, and honourable persons ought to be recognised. He has resigned to participate in a by-election in eastern Portland and his ambition in that regard is to become a member of the Lower House – another honourable chamber in this Parliament – and I have no doubt in my mind that he will succeed.”

Crawford resigned the Senate last Friday as per the Section 40 (1) (a) of the Constitution of Jamaica, while former government senator Ruel Reid’s stint was cut short by his forced resignation after allegations of corruption surfaced in his ministry and some agencies under his watch.

Government Senator Pearnel Charles Jr also lauded Crawford’s contribution to the Senate, indicating that his “hiatus” would be short-lived, as he was sure to lose to the JLP’s Ann-Marie Vaz in the Portland East by-election.

“We on this side certainly wish Senator Crawford all the best and the circumstances under which both senators are not here today may very well be short termed, and I would not want to be premature in my permanent best regards in their departure, but I will say that both Senator Crawford and Senator Reid have served with distinction. We could see them both back in the Senate,” he said.

But Knight was even more strident, telling the Senate that persons must serve the country without harbouring thoughts of thievery.

“They must keep their sticky fingers off the people’s money,” Knight said, adding that the level of corruption at the governmental level, perceived or real, must no longer be allowed to fester.